Rohit said that England are going to be a challenging side to take on, but the team is prepared since they played two T20Is in Ireland and two warm-up matches against Derbyshire and Northamptonshire ahead of the England T20I series after that. The Indian captain was seen sweating it out in nets. 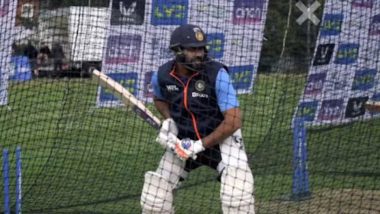 Southampton [UK], July 6: Indian skipper Rohit Sharma said on Wednesday that his recovery from COVID-19 has been good and he is looking forward to playing in the first T20I match against England at Southampton.

Indian opener Rohit Sharma joined Team India ahead of their first T20I game against England, which will take place in Southampton on Thursday. The batter was seen sweating it out in nets. Rohit Sharma Hits the Nets Ahead of 1st T20I Against England, India Captain Plays Some Delightful Strokes (Watch Video)

"Recovery has been good. It has been eight to nine days since I tested positive for COVID-19. Currently, I feel good. I started training three days back. I wanted to participate in the match since my body feels better, and there are no symptoms. I tested negative two to three times. I am looking forward to the game," said Rohit in a press conference. On whether this series is a preparation for this year's T20 World Cup, he said, "We have an eye on World T20. I would not say that (this series) is a preparation. Every match for India is important for us. We want to come here and make sure we tick all our boxes and we get our job done."

Rohit said that England are going to be a challenging side to take on, but the team is prepared since they played two T20Is in Ireland and two warm-up matches against Derbyshire and Northamptonshire ahead of England T20I series after that. On whether the loss in the final Test at Edgbaston has an effect on players here, the captain said, "You want that hunger to be there all the time. I certainly see that hunger in that group. It is disappointing to have not come out on the winning side." IND vs ENG 1st T20I 2022 Preview: Likely Playing XIs, Key Battles, Head to Head and Other Things You Need To Know About India vs England Cricket Match in Southampton

A 269-run partnership between Root and Bairstow helped England create history, with the side completing their highest successful run chase ever in the longest format of the game with a seven-wicket win over India at Edgbaston in Birmingham. England was able to successfully chase down the target of 378 runs set by India. This win comes after England was bundled out for 284 in their first innings, trailing by 132 runs after India posted 416 in their first innings. India was bundled out for 245 in the third innings of the match setting a target of 378 for England to win. He acknowledged the inclusion of youngsters in the squad on the back of good performances for their state or in IPL and said that they deserve the chance to represent the national side.

The captain said that Umran Malik is still in the scheme of things for the team after not performing up to the mark in T20Is against Ireland. "We are trying to give him an understanding of what the team requires from him. We have to see what he has to offer to us. He is an exciting prospect, we have seen it in IPL. It is about giving him a role, whether we want him to bowl with a new ball or in the middle overs because when you play for a franchise, you have a different role. Guys here have a certain skill set, it is about understanding it, fitting these people in the side and giving them role clarity," he added.

Umran Malik, a pace sensation from Jammu and Kashmir, did not have the best start to his International Cricket career after a dream IPL 2022 season with Sunrisers Hyderabad, in which he took 22 wickets. He conceded 14 runs in his only over in the first T20I against Ireland, and took one wicket for 42 runs in four overs, with an economy rate of over 10.