Sutton said that these gliders are unpowered with large wings to glide that can run for long periods of time, adding that they are not fast or agile, however, they are employed for long-range missions. 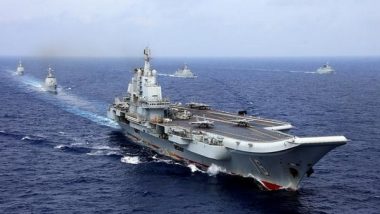 New Jersey, December 31: China has deployed a fleet of underwater drones called Sea Wing (Haiyi) glider in the Indian Ocean, which can operate for months on end and make observations for naval intelligence purposes, according to defence analyst HI Sutton.

Writing for the Forbes magazine, Sutton said that these sea gliders, which the Chinese are deploying "en masse", are a type of Uncrewed Underwater Vehicle (UUV) which were launched in mid-December 2019 and recovered in February after making over 3,400 observations.

Citing the government sources, Sutton in his report said that these gliders are similar to those deployed by the US Navy, one of which was seized by Beijing in 2016 to ensure "safe navigation of passing ships." US State Department Says 70% Chinese Companies with Military Ties Included in Major Global Indices.

"Taken at face value, it may be surprising that China is now deploying these types of UUV en masse in the Indian Ocean. China has also deployed the Sea Wing from an ice breaker in the Arctic," Sutton wrote.

Furthermore, the defence analyst said these Chinese gliders that are placed in the Indian Ocean were reportedly gathering oceanography data, which "sounds innocuous" however, is commonly gathered for naval intelligence purposes."

Noting the rising challenges in the Indo-Pacific region, Chief of Defence Staff General Bipin Rawat earlier this month had said the world is witnessing a race for strategic bases in the Indian Ocean Region (IOR), adding that it is only going to gain momentum in the times to come.

"Of late along with geostrategic competition in the Indo-Pacific, we are also witnessing a race for strategic places and bases in the Indian Ocean region which is only going to gain momentum in the times to come," General Rawat had said while delivering a keynote address at the Global Dialogue Security Summit. India-China Face-Off: No Meaningful Outcome of Talks with China on LAC Standoff, Status Quo Remains: Rajnath Singh.

CDS Rawat had said, "In the military field, technology must be a means of deterrence not a source of destruction. Our approach to security hence needs to shift from unilateral to the multilateral mode which mandates increasing training engagements with partner nations in order to fortify the future."

He said that based on the challenges that India face, "we require structured long term planning for capacity building and capability development of our defence forces."