Following the shrinkage of democracy since Beijing clamped the stringent National Security Law in Hong kong, people fighting for their freedom have been escaping in boats to Taiwan to look for a safe haven. 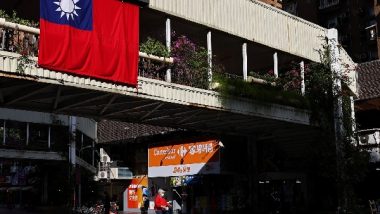 Beijing, May 19: Following the shrinkage of democracy since Beijing clamped the stringent National Security Law in Hong kong, people fighting for their freedom have been escaping in boats to Taiwan to look for a safe haven.

In 2021, Hong Kong no longer remained a safe sanctuary as the People of Hong Kong were losing their freedom gradually following the promulgation of the National Security Law as they subsequently faced persecution and prison terms, dissidents, and members of the opposition, The Singapore Post reported. China's National Security Law in Hong Kong: What Has Changed And Why The Legislation Has Led to More Protests?

Beijing is now planning to bring Taiwan under its control, sending military aircraft and naval ships to the island territory to browbeat Taipei. The world has now spurred in support of Taiwan, with the US posing an intimidating challenge to the Chinese military, the report added.

Documenting the experience of a former student activist of Hong Kong, Lin Fei-fan who had once taken to the streets to demand democracy and freedom, the media outlet stated that he too fled to Taiwan the year Beijing imposed the National Security Law in Hong Kong.

Realizing the importance of defending the independent existence of Taiwan, he had since joined the Democratic Progressive Party of Taiwan. Had he been in Hong Kong, he would probably have been in prison now.

Lately, the Chinese police have even started threatening organizations overseas with prison sentences under the National Security Law for protesting against the violation of human rights in Hong Kong. On March 14, 2022, the foreign secretary of Britain accused the Chinese authorities of trying to silence free speech after the London - based human rights group Hong Kong Watch said it had received a formal warning from Hong Kong police that the group could face a fine and its chief executive Benedict Rogers could face three years in prison.

Recently, several incidents of crackdowns on media and democracy activists have taken place in Hong kong. On December 29, 2021, Cantopop star and prominent pro-democracy activist of Hong Kong Denise Ho was arrested by the national security police along with six other people, and were accused of "conspiracy to publish seditious material.

On November 12, 2021, another Hong Kong activist Ma Chun-man was sentenced to six years in prison under National Security Law for promoting the independence of Hong Kong from China, The Singapore post reported.

The National Security Law transformed Hong Kong into a police state from a vibrant democracy with a freewheeling Press and a rich culture of protests, at one stroke.

Taiwan's Interior Ministry handed out 9,772 residence cards to Hong Kong residents between January and November 2021, compared with 9,501 in the same period in 2020, awarding permanent residency to 1,572 people, according to Radio Free Asia.