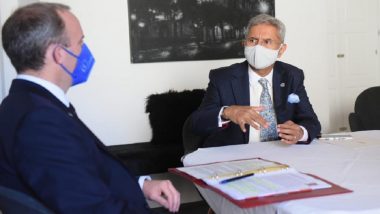 Matera, June 29: External Affairs Minister S Jaishankar on Tuesday met UK Foreign Secretary Dominic Raab and the two leaders reviewed the progress in bilateral ties and discussed global, regional issues and COVID-19 pandemic. Jaishankar, who arrived in Italy from Greece on the second leg of this two-nation tour on Monday, met Raab on the sidelines of the G20 ministerial meetings.

“Met UK Foreign Secretary @DominicRaab this morning. Reviewed the progress of our bilateral Road Map. Discussed the state of the world, regional issues, Covid and Climate Action,” Jaishankar tweeted. The G20 summit is scheduled to be held in Italy in October. India is expected to hold the presidency of the G20 in 2022. At G20 Today Dr S Jaishankar & I Spoke About UK-India 2030 Roadmap, Progress in ... - Latest Tweet by ANI.