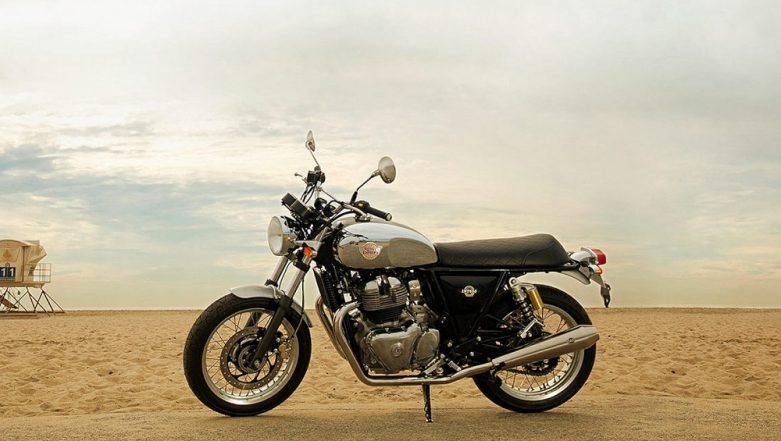 Royal Enfield, a Chennai-based manufacturer on Wednesday launched the highly-awaited middle weight motorcycles – Interceptor 650 and Continental GT 650 in the global market. Priced at $5799 & $5999 respectively, the new 650 Twins are the biggest ever motorcycles in terms of displacement from the Royal Enfield. Moreover, both the motorcycles from Eicher Motors owned Royal Enfield is offered in 3 versions - Standard, Chrome and Custom. Siddhartha Lal has officially confirmed that both the bikes will in stores in India towards the end of this year itself. Royal Enfield Interceptor 650, Continental GT 650 Motorcycles to Launch Globally Tomorrow

As a reminder, Royal Enfield took off the wraps from the new motorcycles last year at EICMA 2017 at Milan. Later on, the company revealed the motorcycles in India at last year’s Rider Mania in Goa. The new Royal Enfield Continental 650 being a modern retro machine sports a relaxed riding style with upright ergonomic and wider handlebars. The design of the new Interceptor 650 motorcycle is inspired from 1960’s Interceptor. The new Continental GT 650, on the other hand, is a retro cafe racer with clip-on handlebars flaunting aggressive riding stance. Carrying a double cradle steel tubular frame, both the models from RE gets 41mm front forks up front along with twin coil-over rear suspensions. The braking duties on the bikes are taken care by a 320mm front and a 240mm rear disc with standard dual-channel ABS. Royal Enfield Pegasus 500 Customer Goes RTI Way; Seeks Answers From Govt Why Pegasus Was Launched Without ABS: Watch Video.

Powering the new 650 Twins are the biggest and most powerful unit ever built by an Indian motorcycle maker. The engine is a 648cc parallel-twin SOHC, air-cooled unit that is capable of developing 47.6 PS @ 7250 rpm and 52Nm @ 5250 rpm. Transmission duties on both the engines are carried out by all-new 6-speed transmission with a slip-assist clutch that transmits power to the rear wheel. As far as the mileage is concerned, the new motorcycles from Royal Enfield are claimed to return to fuel economy of 25.5 kmpl according to World Motorcycle Test Cycle (WMTC). The company has also that 80 percent of the maximum torque is achieved at lower RPMs, which is as low as 2500 rpm. Royal Enfield Interceptor 650, Continental GT 650 Global Launch Next Month - Report.