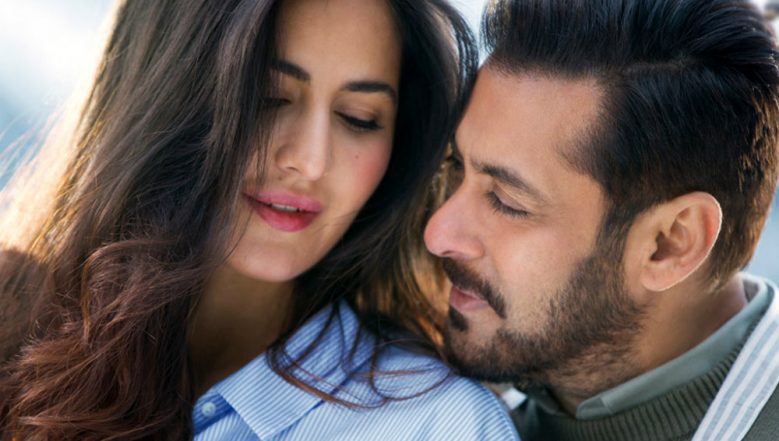 Salman Khan and Katrina Kaif's highly anticipated film Bharat is finally releasing this Wednesday and everyone is obviously excited for the movie including us. Directed by Ali Abbas Zafar, Bharat has been in the news ever since the project was announced. Initially, the movie was supposed to star Priyanka Chopra opposite Salman Khan. However, the Quantico actress opted out from the project at the last minute and then Katrina Kaif was brought onboard as the female lead. Frankly speaking, it would have been fun to watch Khan and PeeCee together on the big screen after 10 long years. But we are happy that Kat was the one who eventually bagged the coveted film. Salman Khan is All Smiles Gazing at 'Seedhi Saadhi Ladki' Katrina Kaif in His Latest Picture and Twitterati Can't Stop Saying "Shaadi Kar Lo"

After all, it always nice to see her and Salman romance onscreen, right? We all know that at one point the two were in a relationship and though things didn't work out between them, Katrina and Khan have always remained good friends. No wonder, they ended up doing quite a few films together. Believe it or not, but Kat and Salman have done 5 films together so far excluding special appearances in each other's films. As for Bharat, it's their 6th film together and technically their 9th which is impressive. What's even more interesting is the fact that Kaif and Khan's jodi has mostly tasted success at the box office. And with so much positive buzz around Bharat, we think this jodi is all set to deliver yet another hit. Bharat: Check Out the Box Office Report Card of Salman Khan and His Eid Releases!

As Salman and Katrina gear up to woo the audience with their latest offering, let's take a look at the films the two have done together in the past.

This was the first film wherein Salman and Katrina shared screen space together. Directed by David Dhawan, the romantic comedy released way back in 2005 and also featured Sushmita Sen and Arbaaz Khan. Though Kat and Sallu didn't end up together in the movie, it turned out to be the fifth highest grossing film of that year.

After their successful debut outing together, Katrina and Salman reunited for Dhawan's film once again in 2007. This time it was Partner co-starring Govinda and Lara Dutta. In this film, Kat wasn't paired opposite Salman but that didn't stop the audiences from showering love on the film which was ultimately declared a blockbuster.

The very next year, this jodi was seen in Subhash Ghai's musical drama Yuvvraaj. While Salman and Kat looked really good together in this one, the film failed to pack a punch at the box office and couldn't impress the audience. Yuvvraaj is the only film of Kat and Salman's that couldn't work its magic at the box office.

In 2012, Khan and Kat came together for Kabir Khan's Ek Tha Tiger and the espionage thriller broke one too many records at the box office back then. It not only became the highest grossing film of 2012 in India by minting Rs 198.78 crore but it also became one of the highest grossing Bollywood films in the overseas market courtesy Salman and Katrina's sizzling chemistry which literally set the big screen on fire.

Directed by Ali Abbas Zafar, Tiger Zinda Hai is Salman and Katrina's biggest hit to date. A sequel to Ek Tha Tiger, the movie arrived in theatres in December 2017 and stormed the box office. In just three days, it ended up raking in Rs 100 crore and then went on to enter the Rs 300 crore club.

So will Bharat leave behind Tiger Zinda Hai in the box office race? Will it emerge as Salman and Katrina's biggest hit ever? Let's wait and watch!