Bollywood superstar Amitabh Bachchan took to Twitter pointing out how Sean Connery's passing away on October 31, 2020 has a James Bond connection. 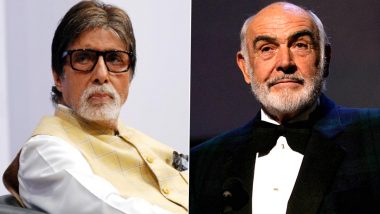 2020 saw the workd loose one of its favourite actors, the original James Bond Sean Connery. The actor, who was 90 years at the time of his passing, left behind a huge and admirable body of work that includes seven James Bond films, that made him an international star. While Connery's caise of death has not been revealed to the media, it is beings said that he passed away in his sleep at his home in the Bahamas. Sean Connery, First James Bond Actor, Dies at 90.

A host of Bollywood and Hollywood celebs took to Twitter to express their condolences on Connery's passing. Bollywood superstar Amitabh Bachchan took to Twitter pointing out how Sean Connery's passing away on October 31, 2020 has a James Bond connection. Sean Connery, the Original James Bond, Dies at 90, Abhishek Bachchan, Hugh Jackman And Others Mourn Loss of the Iconic Actor (View Tweets).

Sean Connery, in 1999, had received the Kennedy Center Honour and was also knighted by Queen Eliabeth II in 2000. He received his last honour, the American Film Institute's Lifetime Achievement Award in 2006 where he also announced his retirement from films. He has also been a 2-time Academy Award winner, A BAFTA felowship recipient, a BAFTA award winner 3 Golden Globe awards. The world's indeed lost a star!

(The above story first appeared on LatestLY on Oct 31, 2020 11:49 PM IST. For more news and updates on politics, world, sports, entertainment and lifestyle, log on to our website latestly.com).