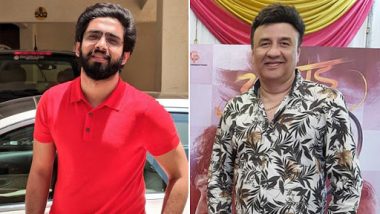 Of the many people whose names were taken in the wake of #MeToo movement, one name that came to the fore was music composer and singer Anu Malik. Singers from his own fraternity, and credible voices such as Sona Mohapatra and  Shweta Pandit gave their accounts on Anu's misbehavior. Post which Anu Malik had to step down from the position of a judge on a popular singing reality show.

And now Anu's nephew Amal Malik states that he doesn't even consider Anu Malik his  family. In an interview when Amaal was asked about Anu's alleged sexual misconduct Amaal maintained,  "When it happened, it is obviously a little humiliating. But, more importantly, I would like to say that my family is first my four people. Beyond that, I don't count anyone as a family. Unki apni family (he has his own family) hai and it was a tough time for them," he said. #MeToo in Bollywood: Sona Mohapatra SLAMS Sonu Nigam For Asking 'Proof' in Anu Malik's Sexual Harassment Allegations Row

Supporting #MeToo movement, Amaal said, "I support the movement and I'm completely with it. What happens is, when people talk on social media, it goes a little wrong. When you have alleged someone and taken their name, you should drag it to the court and through the judicial system, try to achieve what you want to achieve. Because if you don't take it ahead then why did you even do this in the first place."

So much sympathy for a millionaire losing work? So much empathy for his privileged family being ‘tortured’?How about the scores of girls & women he tortured?Multiple testimonies not proof enough?
“Sonu Nigam backs Anu Malik on #MeToo: Where is the proof?” https://t.co/xGajdQQfT8— SONA (@sonamohapatra) December 19, 2018

Amaal also stated that the social media platforms and media trials is not the limit where one should stop at and take case forward to its logical conclusion. It's a known fact that Amaal is a close friend of singer Sona Mohapatra. "I'm close to Sona Mohapatra, if she has said about Anu Malik there must be a reason. And if there is a reason they should move to the court," he concluded.

(The above story first appeared on LatestLY on Feb 01, 2019 08:27 PM IST. For more news and updates on politics, world, sports, entertainment and lifestyle, log on to our website latestly.com).