Chup - Revenge of the Artist is a Bollywood thriller directed by R Balki who has co-written the screenplay with Raja Sen and Rishi Virmani. The movie stars Sunny Deol, Dulquer Salmaan, Shreya Dhanwanthary, Pooja Bhatt, and Saranya Ponvannan. 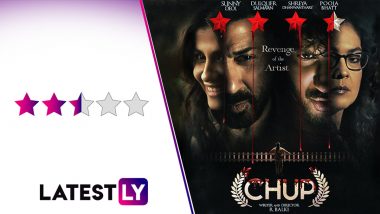 Chup - Revenge of the Artist Movie Review: Before I get into my Chup review, I have to say this - how cool it would be to see Dulquer Salmaan cast as the lead in a  Guru Dutt biopic? The man has the looks, the talent, the charm and comes with the experience of playing a yesteryear icon (Gemini Ganesan in Mahanati). All he needs to do is work around that slight Mallu twang, and we are good to go. Just putting it out there, folks. Anyway, in R Balki's psycho-thriller Chup - Revenge of the Artist, Dulquer plays a florist who is a fan of Guru Dutt's legacy, particularly of Pyaasa and Kaagaz Ke Phool. He also has this 'Gollum' tendency of speaking and chastising himself. Chup – Revenge of the Artist: Amitabh Bachchan to Debut as Music Composer with R Balki’s Film.

Meanwhile, the city of Mumbai is shocked by a spate of killings, where a few film critics are brutally mutilated and murdered, with the killer carving stars on their foreheads. Investigating officer Arvind (Sunny Deol) deduces the significance of these stars has a connection with the last review they put up, and assumes that the killer is targeting those critics who are putting negative reviews.

Then there is Nila (Shreya Dhanwanthary), a young, enthusiastic entertainment reporter who aspires to be a film critic. She meets the florist one day and they begin to share a mutual attraction for each other, though his strange behaviour at times should have rung warning bells for her.

Reviewing Chup is a strange task for me, and that's something you can guess why from the plot itself, or if you have already seen the trailer. Being a critic, it feels bizarre to see a film where our breed is in the spotlight and find someone with murderous intent to eliminate us. To be honest, I loved the concept - after all, a serial killer chooses specific targets, so why not film critics? I also chuckled a few times when Chup was not so chup on some of the 'internal workings' of the entertainment media, especially film reviewers, because of the sense of familiarity.

I could also relate to Nila as a character, a self-confessed film buff aspiring to be critic. Though a little surprised that she couldn't fulfill her aspiration in today's media scene, where it ain't a compulsion anymore that you need to have years of experience of cinema-study to be a critic. What I could not relate is to very glaring "Woody Allen is Innocent" wall-plate in her house. Woh kya tha?

Where I found the whole 'kill film critics' plot element most wavering in consistency is when it turns into a commentary on modern-day film criticism. While I agree that film criticism as an art is waning in quality what with the rise of 'paid critics' and 'Youtube reviewers', Chup in itself doesn't know where to make a stand on this. There are times when it insists on the need of good film critique. Nila, for example, keeps harping on that, even inspiring her senior to dismiss the threat on his life to put up a honest review of a biggie. Or Amitabh Bachchan, in a perfunctory appearance in a R Balki film, insisting the importance of film critique to cultivate good cinema (that felt like a nod to his cameos in '80s and '90s movies where he popped in to give a social message). Even when the killer taunts a victim-critic that she has no awareness of foreign films to understand if a movie is plagiarised, I found myself nodding to his observation.

All well and good, but this happens in a film where some of the critics are brutally dissected and most of the others are treated in a Page 3-manner, not giving them a proper platform to explain their work. Even more confounding is the scene where the killer poses like Guru Dutt in "Ye Duniya Agar Mil Bhi Jayen" from Pyaasa and laughs maniacally when he reads about a critic dying of COVID-19. Considering Chup is co-written by Raja Sen, a popular film critic (whose reviews were some of my 'Ekalavya'-like reference learning before I came to this field), this felt like curious thematic paradox.

Now that I mentioned Pyaasa, how well did Chup revere one of Bollywood's iconic yet tragic figures? Once again, it is inconsistent in the depiction. On one hand, I couldn't stop humming "Ye Duniya Agar Mil Bhi Jayen" after the movie was over and then went home to rewatch Kaagaz Ke Phool and fall in love all over again with Guru Dutt's most misunderstood work, while admiring the beautiful picturisation of "Waqt Ne Kiya Kya Haseen Sitam".

The fanboy touches work - especially loved the little khol interludes borrowed from Pyaasa's "Jaane Kya Tune Kahi" that plays now and then. Also the picturisation of a romantic song, that went beyond Guru Dutt and showed some lovely murals around Bandra of famous film icons, was nice. Chup Song Gaya Gaya Gaya: Dulquer Salmaan and Shreya Dhanwanthary Romance in Rain in This Love Ballad (Watch Video).

I also liked how R Balki intersperses Guru Dutt's influence in the killer's mentality as shown in the epilogue, which I found to be the most engrossing part of the whole movie. But apart from that, Guru Dutt's role in the serial killer angle felt very dicey. Especially when the film puts his demise's responsibility solely on film critics, sorry to say, felt a little irresponsible at this time.

Where Chup - Revenge of the Artist works more effectually is when the focus falls on developing Dulquer's character. There is a darkly attractive aura that is created around him when he hums Guru Dutt film songs, or when he gives in to the dark side of his mind. R Balki as a director also flourishes in the dark side of the film, like the scene where the killer treats a victim's body as a canvas for his macabre painting, with the scene shown from the victim's POV. The pre-interval sequence is an easy highlight with a surprise twist and revealing a better understanding how the killer chooses his victims.

That said, the investigative part of Chup was lacking because, with more focus given to fleshing out Dulquer's part, this portion doesn't bring in the smartness that the track needed. Bar from the part where Arvind deduces the manner in which killer mutilates his victims, the other blocks are very conveniently placed for him to reach to his conclusion, which in turn, is a thrill-less climax that felt surprisingly rushed.

Even, the love story between Dulquer and Shreya's characters, an important aspect of the film, doesn't feel involving because I was more curious as to why the killer (whose identity ain't no secret per se) is doing what he is doing. But that has nothing to do with the actors, with both having good chemistry.

Dulquer Salmaan is the absolute showstopper of Chup, and no, that's not the biased Mallu in me speaking. Without getting into spoilers, Dulquer is stunning in the scenes where his character get into the dark recesses and whether you are familiar with his earlier work or not, I have a feeling that you are bound to end up liking him more after this.

Shreya Dhanwanthary is really good as the rookie reporter, making her mark easily in a film that has Sunny Deol and is dominated by Dulquer. Sunny Deol is surprisingly subdued and restrained which works with the tone of the film, save for the outburst and a 'long jump' in the climax as a reminder that the Deol spirit still lives on. Though she makes her appearance only in the second half, Pooja Bhatt is effective in her role of a criminal psychologist. Saranya Ponvannan (felt a bit awkward to see that 'introducing' tag given to her in the credits) is very likeable as Nila's endearing mother.

At the risk of being targeted by a serial killer next, I found Chup - Revenge of the Artist to be underwhelming, more so because I felt it didn't completely capitalise on its interesting plot-hook. It is still a decent watch and Dulquer Salmaan is simply outstanding. Otherwise, Chup - Revenge of the Artist is very uneven in building up its thriller plotline, the romantic arc or the intriguing social commentary.

(The above story first appeared on LatestLY on Sep 22, 2022 05:19 PM IST. For more news and updates on politics, world, sports, entertainment and lifestyle, log on to our website latestly.com).