Coolie No 1 is the upcoming comedy drama featuring Varun Dhawan and Sara Ali Khan in the lead. The film's lead pair has already grabbed eyeballs of the audience with their sizzling onscreen chemistry and this latest version of the song "Husnn Hai Suhaana" is enough to prove. 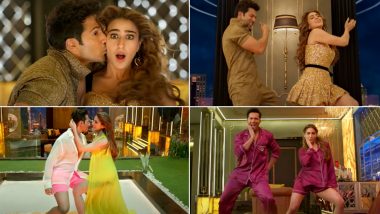 Coolie No 1 is the upcoming comedy drama featuring Varun Dhawan and Sara Ali Khan in the lead. Directed by David Dhawan, who had also helmed the 1995 film of the same name, the lead pair has already grabbed audiences' eyeballs with their sizzling onscreen chemistry. Both Varun and Sara have got amazing dance skills and they have displayed it all in the new version of the song “Husnn Hai Suhaana”. This number is peppy, vibrant and Varun – Sara have burned the dance floor with their killer moves. Coolie No 1 Trailer: Varun Dhawan-Sara Ali Khan Recreate the Goofy Magic of Govinda and Karisma Kapoor Starrer in Their Own Style.

When we talk about the song “Husnn Hai Suhaana”, one can only think of the iconic number that featured Govinda and Karisma Kapoor. It was a huge hit then and even today. But Varun Dhawan and Sara Ali Khan have recreated this chartbuster song with the same energy and quirky dance moves. From the music (composed by Anand-Milind and Tanishk Bagchi) to the vocals (Abhijeet Bhattacharya and Chandana Dixit, who had also crooned the original track) to the setting of the song and the colourful and well-coordinated costumes and of course the choreography, everything is on point. Coolie No 1 Song Teri Bhabhi: Varun Dhawan's Energetic Moves Will Impress You.

Watch The New Version Of Husnn Hai Suhaana Below:

One really cannot take their eyes of Varun Dhawan and Sara Ali Khan’s sizzling chemistry and their expressions. “Husnn Hai Suhaana” is one of the most nostalgic tracks from the 90s and these two have pulled it off brilliantly. This modern version of “Husnn Hai Suhaana” surely seems to be the new hit track! Coolie No 1 is all set to premiere on Amazon Prime Video during the time of Christmas this year!

(The above story first appeared on LatestLY on Dec 09, 2020 01:20 PM IST. For more news and updates on politics, world, sports, entertainment and lifestyle, log on to our website latestly.com).