Dhaakad, directed by Razneesh Razy Ghai, was earlier supposed to release during Diwali 2020. However, the pandemic delayed the film's production and the movie is now coming out in 2021. 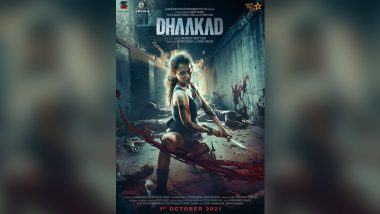 The makers of Dhaakad, Kangana Ranaut's upcoming action-thrillers, seem to be huge fans of the popular video-game character, Lara Croft. Croft, who saw two movie adaptations starring Angelina Jolie and Alicia Vikander, now seems to have inspired Kangana's look in the film as well. However, she isn't named Lara Croft, but rather Agent Agni. Going by her name, she won't be treasure hunter, but rather a spy, as the makers reveal a new poster of the film on January 18, 2021. Dhaakad Teaser: Kangana Ranaut Looks 'Bloody' Good in her Next Action Entertainer.

What's even more interesting than the poster having Kangana's character rip off a very popular videogame character is the release date.

Check Out The Tweet, Posted By Trade Analyst Taran Adarsh:

Also check out the first teaser of the film that came out in August 2019:

As per the latest update, Dhaakad is now releasing on October 1, that is, the Gandhi Jayanti weekend. While we set aside the irony of having a violent film releasing during the birth anniversary of a leader who vouched for peace, the release date is interesting for another matter. In 2019, War, starring Hrithik Roshan and Tiger Shroff, also came out during this period (the irony has been killed earlier, alas!), and it turned out to be the year's biggest hit, earning more than Rs 300 crore at the box office. Kangana Ranaut Shares Glimpses of Her New Year Brunch Party For Team Dhaakad.

(The above story first appeared on LatestLY on Jan 18, 2021 12:11 PM IST. For more news and updates on politics, world, sports, entertainment and lifestyle, log on to our website latestly.com).