After its OTT release, Farhan Akhtar-starrer Toofaan will now reach out to an even wider base of the Indian audience with its world television premiere on Zee Cinema on October 31. 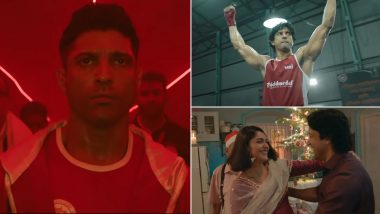 After its OTT release, Farhan Akhtar-starrer Toofaan will now reach out to an even wider base of the Indian audience with its world television premiere on Zee Cinema on October 31. The film directed by maverick filmmaker Rakeysh Omprakash Mehra portrays the journey of an extortionist who transforms into a boxer. The film marks Mehra and Akhtar's second collaboration after the National Award-winning Bhaag Milkha Bhaag. Ted Lasso: Apple TV Shares New Stills From Jason Sudeikis’ Show Before the Premiere of the Season Finale.

Talking about his experience on working in the film, Farhan Akhtar who played the protagonist, said, "While working on Toofaan I realised there are no shortcuts when you want to portray a character like Aziz. And through this experience I came to believe that there are no shortcuts in life. You have to persevere and keep challenging yourself." Shimmy: Pratik Gandhi’s Short Film Produced by Guneet Monga to Premiere on Amazon Mini TV on September 17!

Adding further he said, "To showcase the character's body transformation with utmost fidelity, I had to first put on a great deal of weight and then shed all of that to have a boxer's physique. In short, there is nothing that should stop you if you have passion. That is the lesson of Aziz Ali's journey. Don't forget to watch the world television premiere of 'Toofaan' on Zee Cinema."

(The above story first appeared on LatestLY on Oct 27, 2021 03:45 PM IST. For more news and updates on politics, world, sports, entertainment and lifestyle, log on to our website latestly.com).