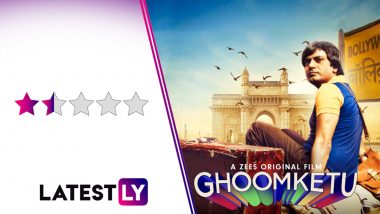 Ghoomketu Movie Review: When a movie comes to your screens, big or small, after years of being stuck in a can, there is a 99% chance that it could disappoint you. Either it would have been dated, or it could be awfully bad. In the case of Ghoomketu, which was made in 2014 and is coming out in 2020 on Zee5, the film doesn't look dated visually. Unless you count the fact that Amitabh Bachchan is younger-looking. Or Ranveer Singh is more Ricky Bahl than Simmba. So that's one misstep the film, directed by Pushpendra Nath Misra, avoids. Visually, that is! Ghoomketu Trailer: Nawazuddin Siddiqui Steals The Show As an Aspiring Writer In This Fun Comedy Drama (Watch Video).

Which brings us to the next aspect - is Ghoomketu a good movie, though? It is different, no doubt, but different can't always be good. In the case of Ghoomketu, it is not just an awkwardly clunky movie, but also a very boring one at that. Half an hour into Ghoomketu, I actually lost head or tail as to where the film is heading, or what's the purpose of it all. Whether it was always this disjointed, or being stuck in the cans for six years, did so.

So what's the movie about? The strangely-named Ghoomketu (Nawazuddin Siddiqui) ran away from his home in village of UP to be a Bollywood writer in Mumbai. In the city, he is given a month's time to crack a good screenplay, failing which he has to return home. Ghoomketu's worried family puts political pressure to seek him out, a task which eventually lands on Inspector Badlani (Anurag Kashyap), a corrupt, incompetent cop who is reluctant to take up the case.

If you think, or rather, how the trailer tried to  hint at it, that the film would be a cat-n-mouse game between Badlani and Ghoomketu, you are wrong. That makes for a very small part of the film. Mishra's film is mostly an insight into the protagonist's thoughts, as Ghoomketu frequently breaks the fourth wall to express his thoughts on screen-writing. From traipsing through genres to his outsider view of the eccentricities of Mumbai, Ghoomketu lets us in to what goes on his mind as a writer.

There is a big flaw here, though.

Ghoomketu isn't a good writer at all, so it makes no sense for the viewer to go through his understanding of movie technicalities. Even his thoughts on Mumbai as a city would feel dated even if the film would have come out in 2014. There is nothing new that the movie has to offer in terms of original insights, even though the format may be quite novel.

Through Ghoomketu's conversations with the audience, we also get glimpses into his family life that he had abandoned. Like, his relationship with his hyper father (Raghubir Yadav) or his belcher of an aunt (Ila Arun) or his single uncle (Swanand Kirkire), who is also a politician. This track also comes across as very pointless, 'cos Ghoomketu isn't a very interesting character to begin with, we really don't care to know what made him the way he is. These scenes don't add much either, save for the fact that we get to see talented actors like Yadav and Arun go loud in their performances. Nawazuddin Siddiqui Birthday: 8 Lesser-Seen Films of the Ghoomketu Actor That You Didn’t Know Are Available Online on Netflix, YouTube and HotStar.

To top it all, Ghoomketu's personal track also displays its backwardness in the depiction of his relationship with his wife (Ragini Khanna, wasted for just two scenes). Perhaps the makers, while shooting for the film, wasn't aware that a movie called Dum Laga Ke Haisha had come out and poked holes at Indian men's perception of skin-deep beauty. Ghoomketu is uninterested in his bride initially, after ending up getting married to her in a comic set of events, because she isn't thin. Only to fall for her when she return to the size that he desires her to be. Yet another reason why we can't empathise with its lead.

Watch the Trailer of Ghoomketu below:

There is also the matter of the film's very clunky editing, that seems to reflect its protagonist's confused state of mind. The cuts and the jumps feel rough, not making Ghoomketu an easy watch.

While Ghoomketu is mostly an experiment gone wrong, it isn't without its mild successeses. Most of the humour is pretty blank, but there are a couple of its comic ideas that work. Like Ghoomketu explaining how a single (bad) joke can elicit different reactions from two different people in different circumstances. Also, take for the fact the thread linking Ghoomketu and the starry cameos, as he imagines the actors in his screenplays. Chitrangada Singh appears in a silent film that portrays Ghoomketu is struggling to get his words right. Ranveer Singh and Sonakshi Sinha speak through his voice, in their interlude (or is it that the actors weren't available for dubbing? I can't really say!). By the time, Amitabh Bachchan appears on the screen, the words have gone beyond Ghoomketu's grasp and found its own voice. While a really fascinating progression, it is, sadly, a very mild redeeming trait for the film.

As for the performances, Nawazuddin Siddiqui is just about okay. Anurag Kashyap struggles in bringing out a comical performance. Among the cameos, Amitabh Bachchan's cameo registers the most impact.

- A Couple of Comic Sequences Work

Ghoomketu is an experiment that refuses to rise beyond its cluttered narrative and turn into an insightful commentary on Bollywood screenwriting. Neither does it work as a comedy. With the 'expired' label hanging high over its head, the movie is at best watchable for trying to figure out when the next star cameo arrives and what exactly is the point of it all! Ghoomketu is streaming on Zee5.

(The above story first appeared on LatestLY on May 22, 2020 12:01 AM IST. For more news and updates on politics, world, sports, entertainment and lifestyle, log on to our website latestly.com).