Rajpal Yadav, who has been in the film industry for 24 years, says he is happy with what he has achieved till date. However, the talented actor, who is mostly known for his comic roles, says he has broken stereotypes and tried to avoid getting typecast. 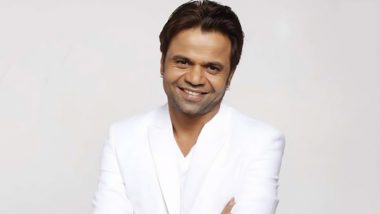 Rajpal Yadav, who has been in the film industry for 24 years, says he is happy with what he has achieved till date. However, the talented actor, who is mostly known for his comic roles, says he has broken stereotypes and tried to avoid getting typecast. "I'm very happy with what I've done till today. From day one I had decided that I would never repeat a character that I have played. Actors get typecast very quickly. So even if I'm offered a similar kind of role, I change its mentality. An actor cannot change his physique but the mentality can be changed," Rajpal Yadav told IANS. Bhool Bhulaiyaa 2: Kartik Aaryan Confirms the Release Date of the Film With a Hilarious Still Featuring Rajpal Yadav.

The actor also revealed what he did to break stereotypes. "I've done all possible variety of roles from negative to comedy to lead and supporting. Some people say, you should not play supporting characters once you've played the lead role. But I have done that and I enjoy breaking these theories," he added. Among the kind of roles that he has portrayed on the screen, Rajpal is known for the comic ones. How easy or difficult is it for him to nail a comic role? Rajpal Yadav Reveals He Initially Refused to Meet Ram Gopal Verma for Career-Defining Movie Jungle (Latestly Exclusive – Watch Video).

"Nothing is easy," replied the actor, adding, "But if your director is good, then the task becomes even more easy for the actor. If you are not understanding a situation and unable to properly communicate with your director, then that reflects on the screen as well." Talking about his personal and professional life, how have things changed amid the ongoing Covid-19 pandemic?

"The entire world has been affected by the pandemic, from travelling to shooting to sports and everything. Can anyone imagine that the Olympics would be held without an audience? I believe in the saying 'jaisa desh vaisa bhesh'. So I will try to live according to the way other citizens of our country are living," he suggested. On the work front, the actor's latest is the digitally-released comedy film 'Hungama 2' directed by Priyadarshan. Rajpal has collaborated with the filmmaker earlier in hilarious films like 'Bhool Bhulaiyaa', 'Hungama', 'Bhagam Bhag' and others.

Opening up on collaborating with Priyadarshan once again, he said: "Whenever I have worked with Priyan Ji, I have experienced a new thrill and I'm very happy to be a part of his Hungama 2 as well. Priyan Ji is an expert with comedy of errors. The miscommunication, running around and complicated situations he creates on the screen, he does it without an iota of confusion in his mind. He does his homework properly, is very focused and energetic on the set."

With films mostly releasing on OTT platforms in the present time, does it make a difference to him as an actor? "I want OTT platforms to become very successful and at the same time cinema halls should also start functioning soon. I would like to thank OTT platforms for releasing our films at a time when theatres are closed because of the pandemic. Because of them, at least our films are reaching the audience," the actor concluded. Also starring Paresh Rawal, Shilpa Shetty Kundra, Meezaan Jafri and Pranitha Subhash, 'Hungama 2' streams on Disney+ Hotstar

(The above story first appeared on LatestLY on Aug 01, 2021 02:33 PM IST. For more news and updates on politics, world, sports, entertainment and lifestyle, log on to our website latestly.com).