He shared a still from the film and revealed that the audience will get to see his film on November 19. The picture features Rajpal Yadav in a religious avatar. He can be seen wearing a white cloth around his body while his face is also painted white. 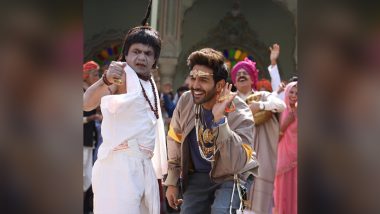 With the nationwide lockdown, many things came to a halt including shoots and the release of films in theatres. Kartik Aaryan's much-anticipated Bhool Bhulaiyaa 2 was one of the many films that were supposed to finish their shoots in 2020 but was postponed indefinitely due to the pandemic. Speculations around the release date of the film were doing rounds ever since and fans were eagerly waiting to know the date when they would get to see their favourite actor on the big screen. Bhool Bhulaiyaa 2: Kartik Aaryan’s Film To Release In Cinemas On November 19!

After several days of speculations,  Kartik Aaryan has finally confirmed the release date of the film. He shared a still from the film and revealed that the audience will get to see his film on November 19. The picture features Rajpal Yadav in a religious avatar. He can be seen wearing a white cloth around his body while his face is also painted white. The picture will surely take you back to his crazy Bhool Bhuliyaa character and maybe a hint that he will be reprising a similar role in the sequel as well.

Kartik is seen in a casual avatar in this picture. He has a necklace tied on his forehead while his neck is covered with ornaments. He is smiling while posing as if he is trying to listen to what someone has to say. Aaryan captioned the image with a witty caption as well. Bhool Bhulaiyaa 2: Anees Bazmee Says Audience Will Get to See Tabu in a Never Seen Before Avatar.

The production of the horror-comedy was affected in March last year due to the COVID-19 pandemic. The team was filming in Lucknow days before the nationwide lockdown was announced. “The film was first planned to be shot in November last year, however, Kartik was sceptical on travelling outdoors and hence, it was called off. Since then, the makers were trying to take the film on floors in January, however, Tabu, who plays a pivotal role in the film, showed her reservations on shooting the film due to the Covid fear after someone close to her got exposed to the virus," a source shared about the commencement of the shoot post the lockdown.

Directed by Anees Bazmee, the psychological-comedy-thriller will also feature Tabu, Kiara Advani, Rajpal Yadav and Govind Namdev in key roles. The film is a sequel to the 2007 horror-comedy, which was directed by Priyadarshan. Bhool Bhulaiyaa starred Akshay Kumar, Vidya Balan and Shiney Ahuja in the lead. Bhool Bhulaiyaa 2 is produced by Bhushan Kumar and Krishan Kumar under their banner T-Series and Murad Khetani of Cine 1 Studios.

(The above story first appeared on LatestLY on Feb 22, 2021 09:17 PM IST. For more news and updates on politics, world, sports, entertainment and lifestyle, log on to our website latestly.com).