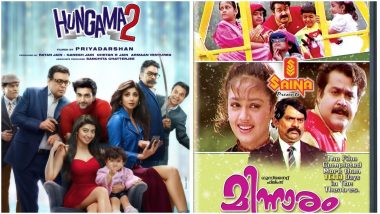 Priyadarshan is one of the most successful transitions from Malayalam film industry to Bollywood, if not the most. Known mostly for his comedy entertainers in Bollywood like Hera Pheri and Hungama, Priyadarshan is returning after a gap with his new feature-length Hindi film, Hungama 2. The movie stars his fave Hindi actor Paresh Rawal along with Shilpa Shetty, Meezaan Jafri, Pranitha Subhash, Ashutosh Rana, Rajpal Yadav and Johnny Lever. Hungama 2 is releasing straight on Disney+ Hotstar on July 23. Hungama 2: Shilpa Shetty, Meezaan Jafri, Paresh Rawal’s Comedy Film To Stream on Disney+ Hotstar From July 23!

Now Priyadarshan, while a National Award-winner and a hit-maker, is also known for another thing. Most of his films, whether in Malayalam and Hindi, are remakes, and there are times when he has remade his own Malayalam hits into Hindi and vice-versa.

Like for example, the first Hungama movie that came out in 2003 was the remake of his Malayalam comedy caper, Poochakkoru Mookkuthi. While the details are unconfirmed, it looks like Hungama 2 might be a remake of his another Malayalam entertainer, the 1994 film Minnaram, starring Mohanlal, Shobana, Jagathy Sreekumar and the late Thilakan.

Why we feel so? The new poster of Hungama 2 is giving us the deja vu vibes.

Before we make the connections, let me remind you of the plot of Minnaram. It is about a young man, played by Mohanlal, brought up by his strict uncle (Thilakan) after the death of his parents, who sees his life topsy-turvy when his ex-girlfriend (Shobana) turns up out of the blue with a baby that she claims is his. The young man insists that the baby isn't his, but no one believes him.

There is also a separate comedy track of Jagathy's character, who thinks the hero is having an affair with his wife (they aren't) and tries to kill him.

So far so good?

Now if you have seen the original, you can now draw the parallels with the new poster. There's a baby here, Meezan could be stepping into Mohanlal's role and Pranitha could be playing Shobana's. Paresh Rawal, who is eyeing Meezan suspiciously could be taking on Jagathy's role, while Shilpa Shetty is playing his wife. I am presuming that both the actors would see their roles expand in the remake, since the Jagathy track was ignored when Minnaram became serious. Hungama 2 Actress Pranitha Subhash Gets Married To Businessman Nitin Raju In A Private Ceremony.

What confirms our suspicions even further is Ashutosh Rana's character who spouts similar kind of moustache as Thilakan did in the original. Also, he is wielding a sword, which Mallu fans can hilariously recall Thilakan doing so in one of the film's funniest scenes.

As for who Rajpal Yadav and Johnny Lever are playing, we are not sure. I could guess that Lever might be playing the role either the late Sankaradi or Kuthiravattam Pappu did in Minnaram, while Yadav could play Maniyanpilla Raju's character, who was Mohanlal's friend in Minnaram.

Interestingly Minnaram itself was inspired by 1972 Malayalam film, Brahmachari, starring Prem Nazeer and Sharada, that itself was a remake of the 1967 Tamil film, Penne Nee Vazhga. Jeetendra's Ek Nari Ek Brahmachari was also inspired by this tamil film.

So what do you say, our Mallu readers? Do you think Hungama 2 is a remake of Minnaram? Share your thoughts in the comments section below.

(The above story first appeared on LatestLY on Jun 30, 2021 07:20 PM IST. For more news and updates on politics, world, sports, entertainment and lifestyle, log on to our website latestly.com).