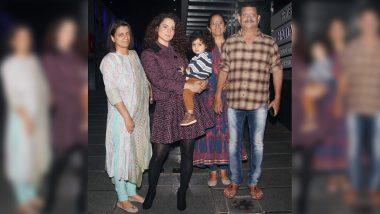 Police patrolling has been stepped up outside the private residence of Bollywood actress Kangana Ranaut in Himachal Pradesh's tourist resort Manali after her family complained of hearing some 'gunshots' late on Friday night near her house. However, no security has been deployed at her residence and there was no anti-social activity. Kangana's father Amardeep Singh Ranaut told IANS that the shots were heard in the nearby apple orchards. Kangana Ranaut Claims She Heard Gunshots Outside her Manali Residence, Believes it was an Attempt to Frighten Her

"They sounded like gunshots, may be they were crackers just to keep the bats away from the orchards that are currently blooming with apples," Amardeep Singh told IANS over phone. Superintendent of Police Gaurav Singh told IANS there was no evidence of firing at the spot. No formal complaint from the Ranaut family has been received. "We received a phone call about loud noise and subsequently patrolling was stepped up in the area as a precaution," he said, adding, "No security has been provided to her". Sushant Singh Rajput’s Family Lawyer Dismisses Kangana Ranaut’s Claims That Movie Mafias Were Involved in His Suicide, Says She Was Not in Touch with Sushant’s Father

Police officials said owners of nearby orchards were questioned and they refused that they bust either crackers or fired gunshots to keep the bats away. Amardeep Singh said they didn't authenticate that whether the sound was from the barrel of the gun. "I was at my native place (in Mandi district) with my family. When we came to know about the noise, we all came here (in Manali) to stay with Kangana," he said.

He said he the family was satisfied with the police action. As per the police statement, at around 9.45 p.m. on Friday, the police station in Manali received a call from the house of Kangana Ranaut wherein stated that they heard some loud noise in the vicinity. On this police team rushed and searched the whole area. Also the CCTV footages, but did not find any anti-social activity. The family of Kangna is settled at Bhambla village near Hamirpur town of Himachal Pradesh, some 200 km from state capital Shimla.

(The above story first appeared on LatestLY on Aug 01, 2020 07:13 PM IST. For more news and updates on politics, world, sports, entertainment and lifestyle, log on to our website latestly.com).