Laxmmi Bomb: The Trailer of Akshay Kumar's Next Horror Comedy to Drop on this Date?

While Laxmmi Bomb is rumoured to release on September 9, Akshay's birthday, it's trailer may drop on this date. 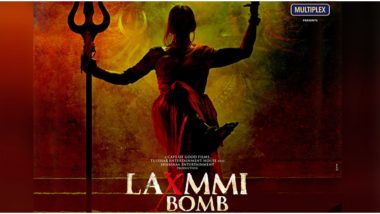 Akshay Kumar's next horror-comedy, Laxmmi Bomb is gearing up for an OTT release and its trailer is expected to come our way very soon. If new reports are to believe, the makers have already finalised a date for its trailer release and it's expected to drop in the next couple of days (today being Aug 12, 2020). While we earlier read stories of the film releasing on Kumar's birthday, September 9, the trailer, in fact, will arrive weeks early on August 18 and this is no random number. Laxmmi Bomb Sold Digitally For Rs 125 Crore? Akshay Kumar Fans Demand Film's Theatrical Release (Read Tweets).

For the ones who don't know, Akshay has a penchant for number 9 and he's obsessed about it. "It is common knowledge by now that Akshay Kumar’s lucky number is 9. Incidentally, the trailer of his last year’s hits, Mission Mangal and Good Newwz, also were unveiled on July 18 and November 18 respectively," said a source close to the development in his conversation with Bollywood Hungama. So there's no way the actor would like to break this chain. While an official confirmation on the same is awaited. we can very expect the trailer to hit the internet in the next few days. Raksha Bandhan, Laxmmi Bomb, Sooryavanshi, Bell Bottom and More - Here's a Look At Akshay Kumar's Upcoming Releases.

Akshay, meanwhile, is in the UK shooting for his next, Bell Bottom. He also got featured as the only Indian actor to find a place in Forbes' list of highest-paid actors of 2020. Laxmmi Bomb is a Hindi remake of hit Tamil movie, Kanchana that starred Raghava Lawrence. The film also stars Kiara Advani in the lead role and is slated to release on Disney+ Hotstar.

(The above story first appeared on LatestLY on Aug 12, 2020 04:48 PM IST. For more news and updates on politics, world, sports, entertainment and lifestyle, log on to our website latestly.com).