Luka Chuppi: Kartik Aaryan, Kriti Sanon Announce the Release of ‘Poster Lagwa Do’ Song With Akshay Kumar and You Can’t Afford to Miss It - Watch Video

Luka Chuppi is slated to hit the silver screens on March 1, 2019. 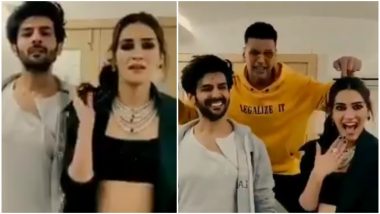 Recently, Dinesh Vijan's Luka Chuppi trailer was dropped online and fans couldn't stop gushing over this new on-screen pair of Bollywood, Kartik Aaryan and Kriti Sanon, who have teamed up for the first time. The trailer garnered a good response. In fact, many flooded social media with their reactions and called it a laugh riot. Earlier today, Kriti Sanon, who is on a promotional spree, took to the photo-sharing app to share a video, where the adorable duo engage in witty banter as Kriti playfully teases her partner. Announcing the release of 'Poster Lagwa Do' song through a thirty-second video, the actress wrote on Instagram, "Poster bhi lagenge, khabar bhi chapegi. Get ready for #LukaChuppi's #PosterSong! Out Tomorrow on youtube.com/tseries" Luka Chuppi: Kartik Aaryan and Kriti Sanon’s Movie Trailer Sparks Hilarious Memes on the Internet

For the uninitiated, Kartik’s upcoming film Luka Chuppi with Kriti Sanon is going to recreate Akshay Kumar’s hit track 'Yeh Khabar Chapwa Do Akhbar Mein' from Aflatoon. Just a couple minutes ago, Kartik took to the micro-blogging site to share another video, which also features Akshay Kumar, and announce the release of 'Poster Lagwa Do'.

#PosterLagwaDo Out Tomorrow at 11am.

Helmed by Laxman Utekar, Luka Chuppi is a romantic comedy. It's a story of a television reporter in Mathura, who falls in love with a headstrong woman. Bankrolled by Dinesh Vijan, the film has extensively been shot in Mathura and Gwalior. In the film, Kartik plays a TV reporter while details about Kriti Sanon's character have successfully been kept under wraps. Luka Chuppi is slated to hit the silver screens on March 1, 2019. Watch this space for further updates.

(The above story first appeared on LatestLY on Jan 28, 2019 06:47 PM IST. For more news and updates on politics, world, sports, entertainment and lifestyle, log on to our website latestly.com).