Pati Patni Aur Woh: Kartik Aaryan and Ananya Panday are All Smiles as They Shoot for a Romantic Scene - Watch Leaked Video! 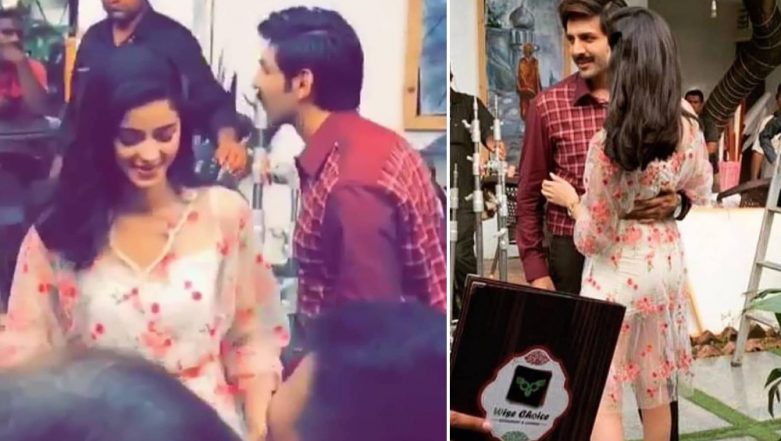 Pati Patni Aur Woh is the upcoming romantic comedy starring Kartik Aaryan, Ananya Panday and Bhumi Pednekar in lead roles. The film was recently being shot in Lucknow where we saw Kartik in his get-up as Chintu Tyagi, donning chequered shirts and his moustache. Earlier we saw Kartik along with Aparshakti Khurana on the sets of the film. Now, we have a new leaked video of Kartik and Ananya from the sets where it looks like the duo are shooting for a romantic song in the film. Sara Ali Khan Can't Stop Smiling as She Receives Rumoured Boyfriend Kartik Aaryan at the Airport - See Pics.

In the video, we see Kartik and Ananya shooting for a romantic scene as he is seen holding her by the waist and what looks like they are dancing. The two are laughing and having a good time as they pull off the romantic dance moves. Their other co-star, Bhumi Pednekar is not in any of the videos.

Check out the leaked video here:

Kartik and Ananya's equation has been amazing the actress has been immensely happy working with him. In a previous interview, she spoke about him being a great co-star and said, "While working with him, I have realised what a selfless person he is. For instance, whenever we did a scene together [during the film’s first schedule], I noticed that he never thought only about his lines. Instead, he was like, how to make the scene better?’ Otherwise too, Kartik has been really helpful to me. Since I am new, I think I need all the help that I can get. That way, he has been extremely supportive." Ananya Panday Parties With Aryan Khan and Other Friends Looking Like a Total Diva - View Pics.

Pati Patni Aur Woh, is a remake of the 1978 original film directed by B.R. Chopra. We will see Kartik play the husband, a role which was earlier essayed by Sanjeev Kumar in the original. Bhumi Pednekar will essay the wife's character played by Vidya Sinha and Ananya Panday will play the role of his girlfriend, which had been essayed by Ranjeeta. The film is slated to release in January 2020.