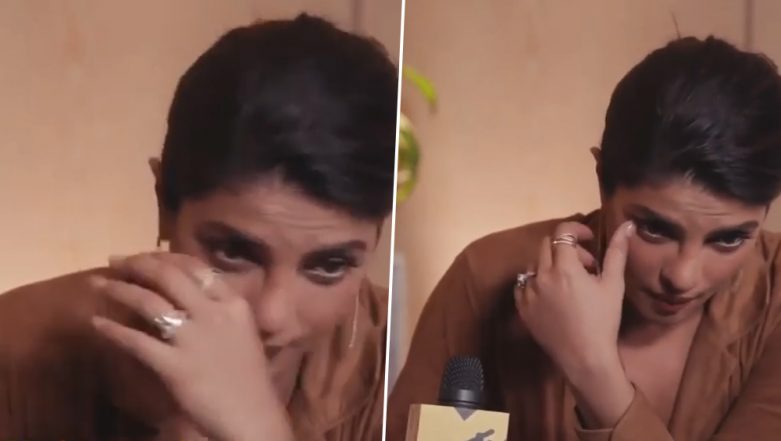 Priyanka Chopra is back to her work mode and is already on a spree of giving multiple interviews. Desi girl took off to attend TIFF 2019 to promote her Bollywood film The Sky Is Pink here. The actress spoke at length about her upcoming projects, working in a Hindi film and more. However, the best part was she mimicking her husband, Nick Jonas! The global icon did not think twice before showing the host how Nick cried while he watched her film. Priyanka Chopra Jets off to TIFF 2019 to Promote Her Film the Sky Is Pink (See Pic).

The host of MTV News asked her whether her Jonas family members watch Indian films. On that, she revealed that Nick recently watched The Sky Is Pink and ended up getting emotional. She mimicked how he wiped his tears, denying he is crying and how she found it funny and cute. She further added that her family will get to see the special screening of the film and they will take time to watch the Indian movies yet. Check out the video below.

😂😂😂 This was funny #priyankachopra #nickjonas #theskyispink

Meanwhile, the actress is super excited to attend the Toronto International Film Festival. The Shonali Bose directed film is slated to premiere at the fest on September 13, 2019. Apart from Priyanka, the film also stars Farhan Akhtar, Zaira Wasim and Rohit Saraf in the key roles. The film is based on the motivational speaker Aisha Chaudhary who was a young Indian author and motivational speaker. She was diagnosed with pulmonary fibrosis. PeeCee plays the role of her mother namely Aditi Chaudhary in the flick.