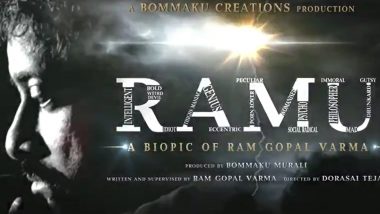 Ram Gopal Varma seems to have been the most productive amid this pandemic given how he has been churning out one project after another online. The director recently released his controversial films such as Naked, Climax on his own digital streaming platform in a pay per view format and is now all set to roll out his own biopic. The film has been titled Ramu and the first look poster of the film was released recently by the director. RGV also took to Twitter to release a motion poster of the film which shows the director's side profile along with a lightening in the background. Ram Gopal Varma’s Controversial Film ‘Murder’ on Stay by Telangana Court As Pranay Kumar Case Is Still Under Probe.

On the poster, the film's name Ramu is spelled in big letters consisting of words such as 'Intelligent', 'Genius', 'Eccentric', 'Porn Lover' and 'Gutsy' among other words. The motion poster released by the director is of the first part of his biopic. As per the director's tweets from before, the film will be a three-part biopic. In a tweet about the same, RGV had written, "Each part of the 3 parts of my biopic will be around 2 hours in length with all 3 parts together being around 6 hours #RgvBiopic."Ram Gopal Varma Reveals First Poster of Arnab: The News Prostitute That Claims to Expose the Republic Editor (View Tweet).

Check Out the Motion Poster Here:

The shooting of the film will be commencing in September. Varma also revealed that every part of his biopic will deal with his various 'age periods' and 'phases of his life'. As for the film's casting, the director had written saying, "In PART 1 a new actor is playing me when i was 20 years old. A different actor will be playing in PART 2 and I will be playing Myself in part 3."

(The above story first appeared on LatestLY on Aug 26, 2020 06:03 PM IST. For more news and updates on politics, world, sports, entertainment and lifestyle, log on to our website latestly.com).