Ravi Kishan Hits Back at Anurag Kashyap's Allegations of Weed Smoking, Says 'I'm Saddened He Won't Support Me in This War on Drugs

A war of words has begun between filmmaker Anurag Kashyap and actor Ravi Kishan. The actor, who also serves as Bhartiya Janata Party MP, raised the drug issues in Lok Sabha on Monday. Reacting to Ravi's stance, Anurag said in an interview that the actor is a weed smoker himself. Ravi Kishan replied, "I didn't expect such words from Anurag Kashyap." 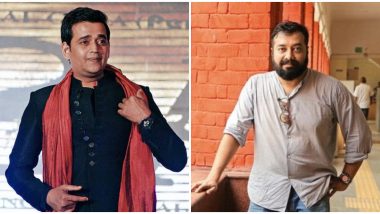 A war of words has begun between filmmaker Anurag Kashyap and actor Ravi Kishan. The actor, who also serves as Bhartiya Janata Party MP, has praised the Narcotics Control Bureau (NCB) for the probe into Sushant Singh Rajput case which led to the arrest of Rhea Chakraborty for alleged use of drugs. He also raised the drug issues in Lok Sabha on Monday, earning support from Jaya Prada. Reacting to Ravi's stance, Anurag said in an interview that the actor is a weed smoker himself, prompting Ravi to hit back. As per ANI, Ravi Kishan said, "I didn't expect such words from Anurag Kashyap," Monsoon Session 2020: Ravi Kishan Raises Bollywood-Drugs Nexus in Lok Sabha.

Ravi further added, "It's no secret I am a devotee of Shiva so I chant his name. I'm saddened he would not support me on this issue of the war on drugs & say that I smoked up & am now clean just because I'm a minister, which I'm not,"

In an interview with Faye D'Souza, Anurag had said, "Ravi Kishan acted in my last film Mukkabaaz. Ravi Kishan starts his day by saying Jai Shiv Shankar, Jai Bam Bhole. Jai shiv Shambhu For the longest period of his time, he has been somebody who has used weed. It is life. Everybody knows it. The whole world knows. There’s not a single person who doesn’t know that Ravi Kishan does not smoke up. He might have quit now, that he has become a minister, he might have cleaned up." Anurag Kashyap Wanted To Cast Ranveer Singh For Bombay Velvet But His Studio Refused.

Praising the NCB, Ravi had said, "We know the problem of drug trafficking and drug addiction is increasing. In this conspiracy, our neighbouring countries are involved... Drugs come to this country via China and Pakistan. Our film industry, too, is affected." Jaya Prada Supports Ravi Kishan's Comments on Drug Trafficking, Claims Jaya Bachchan is Doing Politics Over the Issue.

The drug probe has caused quite a few rifts in the Indian film industry. Kangana Ranaut, who admitted to being an ex-drug abuser, had called out the alleegd rampant use of drugs in Bollywood. Urmila Matondkar called her out for not giving up the names of the people and added that the Queen actress should begin the crackdown with her home state, Himachal Pradesh.

(The above story first appeared on LatestLY on Sep 19, 2020 07:18 PM IST. For more news and updates on politics, world, sports, entertainment and lifestyle, log on to our website latestly.com).