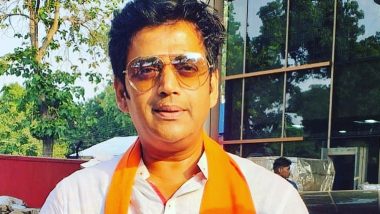 New Delhi, Sep 14: Actor and BJP Member of Parliament from Gorakhpur, Ravi Kishan, on Monday raised the issue of drugs in Lok Sabha during the ongoing Monsoon Session. He said that the Bollywood is addicted to drugs.

"Huge amount of drugs is being supplied in the country from China and Pakistan. The drug game is being played through the Punjab and Nepal route. The youth of the country are becoming victims to it," Ravi Kishan said.

Terming the issue "very serious", the MP urged the Centre for strict action in the matter.

Speaking about drug-related arrests in the Sushant Singh Rajput case, he said that the NCB is doing a great job. Strict action is needed to bust drug network.

(The above story first appeared on LatestLY on Sep 14, 2020 03:32 PM IST. For more news and updates on politics, world, sports, entertainment and lifestyle, log on to our website latestly.com).