Saif Ali Khan Apologises for Remarks on Adipurush and Raavan, Says 'Lord Ram Has Always Been the Symbol of Righteousness & Heroism for Me'

Saif Ali Khan had said that Adipurush will justify the actions of Raavan. After facing backlash, now, Saif has taken the moment to reflect on his words and has withdrawn his remarks. 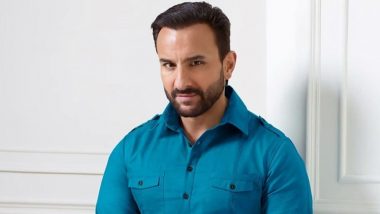 Saif Ali Khan stirred up a hornet's nest when he spilled the details of his upcoming film, Adipurush. The actor plays the role of Lankesh, Demon King Raavan in the film, and Prabhas plays the role of Lord Ram. In a recent interview, Saif said that the movie will humanise Raavan and justify his abduction of Sita, as Lakshman chopped off Raavan's sister's nose. Of course, the actor faced a backlash on the internet, which also included harsh words from political figures. Now, Saif has taken the moment to reflect on his words and has withdrawn his remarks. Bhoot Police: Saif Ali Khan, Jacqueline Fernandez, Arjun Kapoor and Yami Gautam Head to Mumbai for Second Shooting Schedule.

In a new statement, Saif said, "I’ve been made aware that one of my statements during an interview, has caused a controversy and hurt people’s sentiments. This was never my intention or meant that way. I would like to sincerely apologise to everybody and withdraw my statement. Lord Ram has always been the symbol of Righteousness & Heroism for me,"

The actor further added, "Adipurush is about celebrating the victory of good over evil and the entire team is working together to present the epic without any distortions." Saif Ali Khan Says Adipurush Will Justify Raavan Abducting Sita and He Is Not Safe From Twitterati's Wrath Anymore.

Earlier, in An interview with Mumbai Mirror, Saif had opened up on playing Raavan in Prabhas starrer Adhipurush and said, "It’s interesting to play a demon king, less strictures in that. But we will make him humane, up the entertainment quotient, justify his abduction of Sita and the war with Ram as revenge for what was done to his sister Surpanakha by Lakshman, who cut off her nose."

Taking to Twitter, BJP leader Ram Kadam had said, "Actor Saif Ali Khan has made an extremely shocking statement regarding his forthcoming film Adipurush. Saif, who plays Ravan's character, says Ravan's abduction of Sita Maa and his war against Sri Ram will be justified."

(The above story first appeared on LatestLY on Dec 06, 2020 03:40 PM IST. For more news and updates on politics, world, sports, entertainment and lifestyle, log on to our website latestly.com).