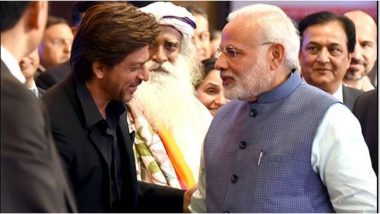 Indian Prime Minister Narendra Modi is celebrating his 70th birthday today. Wishes for him are coming in from all walks, from all corners of the world. Shah Rukh Khan took to his Twitter handle to share a birthday wish for Modi. The actor kept is straight and simple by writing: "Wishing PM @narendramodi health and happiness on the occasion of his birthday!" Within 25 minutes the tweet had received over 11 thousand likes. In October 2019, when SRK had posted a picture with Modi and Aamir Khan, it received over 109 thousand likes. PM Narendra Modi 70th Birthday: Salman Khan, Ajay Devgn Send Warm Wishes to the Indian Prime Minister (View Tweets).

Shah Rukh Khan and Narendra Modi have been tweeting to each other for a long time now. In fact, in 2014, SRK had become the victim of a fake tweet attributed to him where he said that he'd leave India if Modi becomes the PM. SRK had clarified: "Good time to tell all fools who r talking of a tweet that I didn't tweet, u suck as much as the grammar of that fake tweet & I'm being kind."

On his birthday, Narendra Modi has received birthday wishes from a host of Bollywood celebs. Kangana Ranaut shared a video and sang praises for the PM. Salman Khan tweeted a picture with the PM to wish him. And of course, video of Mallika Sherawat singing birthday wish for Mr Modi Ji is going viral again. Shah Rukh Khan's Son AbRam Stands in Their Balcony With a Lego Diya to Support PM Modi's '9 PM, 9 Minute' Call, Gauri Khan Shares the Adorable Video!

Wishing PM @narendramodi health and happiness on the occasion of his birthday! @PMOIndia

Wishing PM @narendramodi health and happiness on the occasion of his birthday! @PMOIndia

In October 2019, the PM held a meeting with many Bollywood celebs to discuss the celebration of Mahatma Gandhi's 150th birth anniversary. In his opening speech at the event, SRK had joked that thanks to the Prime Minister, he finally hugged Aamir Khan, who is often called his rival.

(The above story first appeared on LatestLY on Sep 17, 2020 08:08 PM IST. For more news and updates on politics, world, sports, entertainment and lifestyle, log on to our website latestly.com).