Sushmita Sen Pens a Heartfelt Post On Sushant Singh Rajput, Says Would Have Loved to Share Mysteries Of The 'Universe' From One Sush To Another 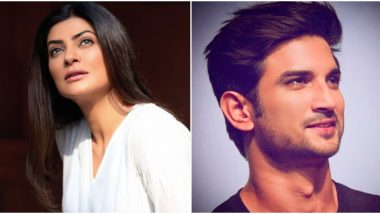 The trailer of Sushant Singh Rajput's last film, Dil Bechara released on July 6 and fans have been having a hard time as it has been an immensely emotional experience given the tragic death of the actor last month. Sushant died by suicide on June 14, leaving his friends and family distraught. His fans have been showering immense love and support for his last film so as to cherish his work and life. Other Bollywood celebs also came forward to promote his film and ask their fans to give it all their love. Recently, actress Sushmita Sent took to Instagram to share a post about the actor and had some rather beautiful things to say about him. Dil Bechara Trailer: Sushant Singh Rajput's Manny Enters Our Hearts like a True Heartthrob, One Last Time.

The Aarya actress said that even though she hadn't met Sushant and didn't know him personally, she stated that she feels like she knows him well now thanks to his fans. Calling his dazzling smile "life-affirming", Sen revealed that she would have loved to have worked with him and said, "we would’ve had the time, to share the mysteries of the ‘Universe’ from one Sush to another...and maybe, even discovered why we both had a fascination for the number 47!!!" Addressing his fans, Sushmita said, "To all you Sushant Singh Rajput Fans...He was blessed to be this loved by you all...not just as a brilliant Actor but also, as a celebrated human being." Dil Bechara Trailer: 6 Moments From Sushant Singh Rajput and Sanjana Sanghi's Love Story That Deserve Special Love.

I didn’t know Sushant Singh Rajput personally...only through his films & some interviews!! He had tremendous emotional intelligence both on & off screen!! ❤️ I feel like I know him better now, all thanks to his fans...Countless lives that he touched, with endearing simplicity, grace, love, kindness & that life affirming smile!!!🤗❤️ To all you Sushant Singh Rajput Fans...He was blessed to be this loved by you all...not just as a brilliant Actor but also, as a celebrated human being, one who belonged!!🤗 I wish I knew him, had the opportunity to work with him...but mostly, that we would’ve had the time, to share the mysteries of the ‘Universe’ from one Sush to another...and maybe, even discovered why we both had a fascination for the number 47!!! 🤗 Loved the Trailer of #dilbechara ❤️ Here’s wishing the very best to everyone in the team!!! My regards & respect to Sushant’s family, friends & loved ones..his fans!!! #peace #strength #duggadugga ❤️ I love you guys!!!

Sushmita along with her post shared the poster of the late actor's last release, Dil Bechara which is all set to premiere on July 24 on Disney+ Hotstar. The film has been directed by Mukesh Chhabra and stars Sanjana Sanghi alongside Sushant Singh Rajput.

(The above story first appeared on LatestLY on Jul 07, 2020 11:00 AM IST. For more news and updates on politics, world, sports, entertainment and lifestyle, log on to our website latestly.com).