Thar, directed by Raj Singh Chaudhary, is all set to stream on Netflix from May 6. The movie stars Anil Kapoor, son Harsh Varrdhan Kapoor and Fatima Sana Shaikh in lead roles. Read all you need to know about the thriller here! 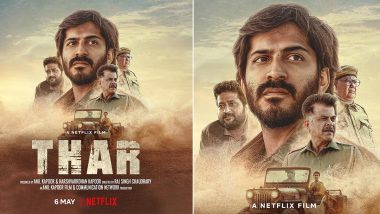 Earlier, while speaking about Thar, Anil Kapoor said in a statement that the idea of the movie was given by his son. He said, "Harsh Varrdhan has a very unique approach and his choice of films are also very distinct. The film was brought to me by Harsh Varrdhan and he was very passionate about the project and he played an integral part in this film coming together." So, if you are planning to watch Thar on Netflix, here's everything you want to know about the crime-thriller movie just in case. Thar Trailer: Father-Son Duo of Anil Kapoor and Harshvarrdhan Kapoor Unite for a Gripping Thriller.

Thar unveils a thrilling story about murder cases in a village of Rajasthan. The movie is full of twists and turns and dark mysteries.

Thar will release on OTT platform Netflix on May 6, 2022. However, no particular streaming time for the neo-Western thriller has been unveiled or confirmed it. Thar: Netflix Drops First Stills of Anil Kapoor, Harsh Varrdhan Kapoor and Fatima Sana Shaikh’s Upcoming Film (View Pics).

Thar reviews are out! Click here to read the review of Harsh Varrdhan Kapoor-starrer. Stay tuned!

(The above story first appeared on LatestLY on May 04, 2022 02:43 PM IST. For more news and updates on politics, world, sports, entertainment and lifestyle, log on to our website latestly.com).