The Big Bull Trailer Review: Abhishek Bachchan Looks Intriguing As A Stockbroker in This Upcoming Film Based on The 1992 Harshad Mehta Scam (Watch Video)

The trailer is a very accurate look into what the film is all about. Abhishek's character gives us a slight flashback of his Guru days and we are sure his fans are eagerly waiting to see him in this avatar. 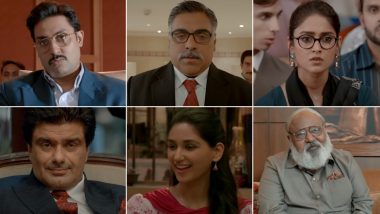 The stock market has always been an exciting discussion for many and Bollywood often finds its inspiration from the stories that brew in the market. In the past, we have seen many films based on the stock market and Abhishek Bachchan is now attempting to bring a new version of the biggest scam in Indian history. The makers of The Big Bull have been teasing fans with posters and glimpses of the film and now have finally unveiled the trailer as well. The trailer looks intriguing and Abhishek Bachchan is doing just the justice to his role. The Big Bull Trailer: Abhishek Bachchan Looks Impressive As He Pulls Off ‘The Mother of All Scam’.

The trailer shows how Abhishek Bachchan's character rises to the top with some hard work and multiple frauds. The story revolves around how he pulls off the biggest scam in India with an aspiration to become the first billionaire in India. We get to see a few glimpses of Ileana D'Cruz as well, who will be essaying the role of a journalist in the film. She will unmask the real face of Abhishek's character with a news report, as shown in the trailer. We also see Soham Shah, Nikita Dutta, Ram Kapoor, Supriya Pathak, Saurabh Shukla in the trailer and can safely say that their characters look impressive.

The trailer of The Big Bull is a very accurate look into what the film is all about. Abhishek's character gives us a slight flashback of his Guru days and we are sure his fans are eagerly waiting to see him in this avatar. Seeing Ileana after such a long time is refreshing and her character looks powerful, confident and strong. The role is different as we rarely have seen her in such an avatar. Veterans like Ram, Supriya, Saurabh assure that there will be something intriguing to look forward to in the film which is loosely based on the life of Harshad Mehta and his financial crimes.

The super-paced thriller had barely a few days of shoot remaining when the country went under lockdown. During this, Bachchan tested positive for the COVID-19 and spent nearly a month in hospital before complete recovery as well. Producer Anand Pandit had revealed, "Abhishek is a good-natured trooper and is going out of his way to accommodate us despite having battled COVID-19. He is thankfully totally healthy now and as enthusiastic as ever. It is a blessing to have him as our lead star." The Big Bull: Ileana D'Cruz Officially Comes on Board for this Abhishek Bachchan Starrer, Shares Her First Look.

The flick is directed by Kookie Gulati and revolves around the Harshad Mehta securities scam of 1992. Ajay Devgn, Anand Pandit, Kumar Mangat Pathak and Vikrant Sharma are co-producing and presenting the film. The film will release on Disney+ Hostar on April 8.

(The above story first appeared on LatestLY on Mar 19, 2021 11:46 AM IST. For more news and updates on politics, world, sports, entertainment and lifestyle, log on to our website latestly.com).