Umang 2019: Akshay Kumar's Ex Girlfriends Raveena Tandon and Shilpa Shetty Bumped Into Each Other and Here's What Happened Next! (View Pic) 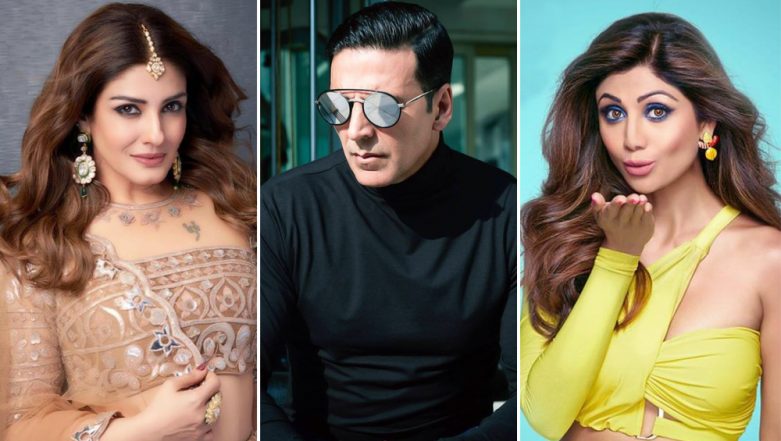 Bollywood has been funny when it comes to exes. However, what’s funnier is the fan reaction when the star exes run into each other or run into their rivals. 'Umang 2019', an event to celebrate the achievements of Mumbai Police, too was a platform where Bollywood celebs met each other. And now guess who ran into each other? Akshay Kumar’s ex-girlfriends Raveena Tandon and Shilpa Shetty. Akki was present at the event too! Umang 2019: Kartik Aaryan, Yami Gautam and Jacqueline Fernandez Among the Performers This Year - Watch Their Dance Videos.

The 90s divas were all decked up, looking gorgeous at the glitzy event. However, if you expected some drama to happen at this event, then you might be surprised to hear the opposite. In fact, both the beauties were seen laughing and bonding with each other. This amazing moment was captured in a frame. Have a look!

Akshay’s affairs with Raveena and Shilpa was a rage. Their on-screen chemistry as well as off-screen bonding used to grab headlines. However, over the time there was a strong buzz about the actor moving on with his life with Twinkle Khanna and the bond with both the actresses turned sour. They have been quite cordial publicly but are not seen interacting with each other much.

Meanwhile, Akshay made a dashing entry with Rohit Shetty and his on-screen cops Ajay Devgn (Singham) and Ranveer Singh (Simmba). The Khiladi Kumar too will be donning the cop’s uniform for first film with Rohit Shetty namely Sooryanvanshi. Naturally, his entry and performance attracted claps and whistles. So, all’s well that ends well.