Vidyut Jammwal: Kalaripayattu Says Everything We See Is a Perspective, Not the Truth 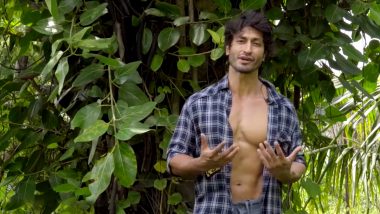 Action hero Vidyut Jammwal on Tuesday treated fans to wisdom about the Indian martial art kalaripayattu. Vidyut posted a video on Instagram, where he is seen moving around in a space that is full of optical illusions. Vidyut Jammwal Says He Is Counting His Rainbows Not Thunderstorms, Actor Shares His Charming Casual Look (See Pics).

"#kalaripayattu says: Everything we see is a perspective, not the truth #opticalillusion #movement #martialarts #ITrainLikeVidyutJammwal," he wrote as caption. On the work front, Vidyut has just finished shooting for the action thriller "Sanak", which casts him opposite Bengali actress Rukmini Maitra. Vidyut Jammwal Sheds Light On Erectile Dysfunction and Men’s Sexual Health (Watch Video).

"Sanak" marks Rukmini's Bollywood debut. The film is directed by Kanishk Varma, and also features Chandan Roy Sanyal and Neha Dhupia. He also has the second part of "Khudah Haafiz".

(The above story first appeared on LatestLY on Jul 13, 2021 11:15 PM IST. For more news and updates on politics, world, sports, entertainment and lifestyle, log on to our website latestly.com).