Zaira Wasim Gets Support from Twitterati for Her Religious Post on Locust Attack, Fans Trend #StandWithZaira after the Dangal Fame Was Slammed on Social Media

Zaira Wasim had shared a tweet on the recent locust attack that has happened in parts of the country. She quoted it from the Holy Quran and that did not go down well with a few netizens and ended up being trolled brutally. 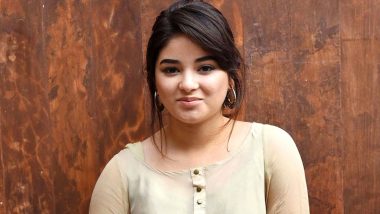 Zaira Wasim shot to fame for the role in her debut film Dangal. Her impeccable performance as Geeta Phogat was lauded by critics and fans. She then did two films, Secret Superstar and The Sky Is Pink, but before the latter hit the big screens, Zaira announced that she is quitting Bollywood as it conflicted with her religious beliefs. The actress has topped the headlines once again for the post that she shared on locust attack. On May 27, Zaira shared a tweet on the recent locust attack that has happened in parts of the country. She quoted it from the Holy Quran and that did not go down well with a few netizens and ended up being trolled brutally. Now some of them have extended their support to the Dangal fame on Twitter by using the hashtag #StandWithZaira. Zaira Wasim Quotes the Quran on Locust Attacks, Deletes Social Media Accounts After Facing Backlash.

The post shared by Zaira Wasim read, “So We sent upon them the flood and locusts and lice and frogs and blood: Signs openly self-explained: but they were steeped in arrogance- a people given to sin -Qur’an 7:133 (sic).” Zaira deleted her social media account following the backlash. She was criticised for being insensitive to the loss of human lives. Now some of the Twitterati have come forward and stated that there was nothing wrong in what the young girl stated as even she has the freedom of speech to express on the ongoing situations in the country. Let’s take a look at some of the posts shared by Twitterati. Priyanka Chopra Jonas Praises Zaira Wasim During The Sky Is Pink Promotions despite Her Decision to Quit Films.

People with lack of Knowledge doesn't have any moral values just trolls and blames the person who is saying what is right and wrong.

When people like Zaira Wasim opens up, people will call as an Terrorism speech which is baseless.#StandWithZaira #standwithzairawasim pic.twitter.com/p0WSAikrtM

Lauded For Being Brave

Don't worry we all are with you, and

#StandWithZaira bringing god from any religion in everything is really backward but also trolling someone juut for quoting verse or statement from any religious book is also backward, many of us subconsciously refer to such books or verse in day to day life. It's obvious.

The Indian Constitution gives every citizen the right to speak about their religion.

All Support For Zaira Wasim

Those people ridiculing her has no regard for any religion.. and it's causing such chaos becoz its true.. Truth never sits well with such people #StandWithZaira pic.twitter.com/uEIO5l9Jef

(The above story first appeared on LatestLY on May 30, 2020 09:02 AM IST. For more news and updates on politics, world, sports, entertainment and lifestyle, log on to our website latestly.com).