On July 29, Diljit Dosanjh drooped his latest music video G.O.A.T which is an abbreviated version of Greatest of all Time and boy its awesome sauce. Check it out. 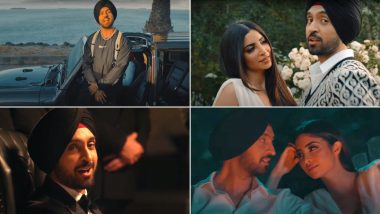 Diljit Dosanjh is a powerful name in the showbiz, as the Punjabi star wears many positive titles with equal panache. The good looking lad is an anchor, judge, actor, singer and more. On July 29, Dosanjh drooped his latest music video G.O.A.T which is an abbreviated version of Greatest of all Time and boy its awesome sauce. The melody has been sung by Diljith himself in which he can be seen romancing model, Elwa. The lyrics of the song is churned by Karan Aujla whereas the music is by G-Funk. In case, you are up for some peppy number this Punjabi track should be on your playlist. Suraj Pe Mangal: Manoj Bajpayee, Fatima Sana Shaikh and Diljit Dosanjh Starrer to Not Skip Theatrical Release?

The video sees Diljit at his suited booted best. The highlighting part bout the song is the SWAG of the actor where he nails it and how. Even the lyrics of this one is catchy and will be on your mind once you watch and listen a few times. Dosanjh took to his Twitter and shared the song along with also mentioning that the full album will be out by evening. Well, we are sure fans can't wait. Kareena Kapoor Khan Has a Complaint from Diljit Dosanjh before the Music Video of Kylie+Kareena Releases.

Check Out The G.O.A.T. Song Starring Diljith Dosanjh Below:

Prior to the release of G.O.A.T, fans had trended the same on Twitter. Also, one of the interesting things about the melody is that the singer can be seen in his usual, wearing branded and fashionable attires looking glamorous. What's you take on the music video? It's yay or nay? Tell us in the comment section below. Stay tuned!

(The above story first appeared on LatestLY on Jul 29, 2020 03:50 PM IST. For more news and updates on politics, world, sports, entertainment and lifestyle, log on to our website latestly.com).