Blonde is an upcoming film directed by Andrew Dominick and tells a fictionalised recounting of Marilyn Monroe's complicated life. Starring Ana de Armas, here's all you need to know about the upcoming film. 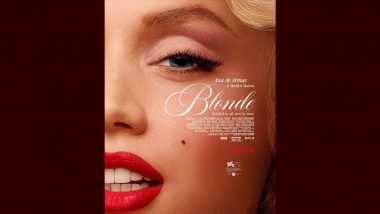 Ana de Armas' take on Marilyn Monroe, Blonde, drops this Wednesday on Netflix. Being a fictional recounting of the late actress' life, the film will focus on many beats of Marilyn's earlier life and will focus on how she came about to be an actress with a dreamy feel to it as it adapts the 2000 Joyce Carol novel of the same name. Blonde Review: Critics Praise Ana de Armas' Portrayal of Marilyn Monroe, Call the Biopic 'Explicit' and 'Infuriating'.

While Blonde has received quite the negative reception due to its portrayal of Marilyn herself, many are still intrigued to see what director Andrew Dominick has in store for us. So, before you check out the film on Netflix, here's all you need to know about it.

Blonde is a fictionalised recounting of Marilyn Monroe's life. Focusing on her traumatic childhood and her becoming an actress in the 1950s, the film will focus on her issues of being exploited, drug addictions, love issues and more.

Watch the Trailer For Blonde:

Blonde releases on Netflix on September 28, 2022 and will be available to stream at 12:30pm. To watch the film however, you will need a valid Netflix subscription. Blonde Star Ana de Armas Reacts to Her Nude Scenes From Marilyn Monroe Biopic Getting Viral.

The reviews for Blonde aren't out yet. As soon as they are, the page will be updated.

(The above story first appeared on LatestLY on Sep 27, 2022 12:44 PM IST. For more news and updates on politics, world, sports, entertainment and lifestyle, log on to our website latestly.com).