Death on the Nile Ending Explained: Decoding the Climax to Gal Gadot, Ali Fazal’s Whodunit and How it Sets Up Hercule Poirot’s Future! (SPOILER ALERT)

Branagh’s Poirot is a shining point of Death on the Nile. It does set up his future in a very optimistic and hopeful way. So with that being said, here is the ending for Death on the Nile explained. 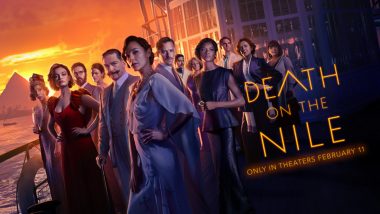 Death on the Nile features a twist that is predictable from the first frame you see the characters. It doesn’t leave much excitement while watching as when everything starts unfolding, you just realise how predictable it was. While the twist might have been underwhelming, Branagh’s Poirot is a shining point of Death on the Nile. It does set up his future in a very optimistic and hopeful way. So with that being said, here is the ending for Death on the Nile explained.

After Jacqueline and Simon are revealed to be the killers of Linnet, Bouc and Louise, they try escaping from the ship. They pull a gun on the passengers of the ship and reveal they killed Linnet because they wanted to inherit her wealth, and the other two because they saw them commit the crimes.

Poirot and Salome Otterbourne also pull up a gun and have both of them pinned. Realising they have nowhere to go, Jacqueline pulls Simon close to her and hugs him. She shoots a bullet in his back which ends up hitting her as well. They both die in each other’s arms.

The boat gets pulled up back to the shore, and the bodies are taken away to be buried. Poirot bids a goodbye to everyone, and has a final conversation with Salome. Not being able to dedicate his time to her, Salome says, “maybe next time” and walks away in disappointment.

In the end we see Poirot visit the bar where Salome sings. He sits in the front row where the camera finally reveals his face. He has shaved, and his scar from the war is clearly visible right now. The movie ends with him enjoying Salome’s performance.

How Does it Set Up Hercule Going Forward?

Death on the Nile heavily focuses on Hercule actually trying to find a human connection with himself. Having faced disappointment with love once already in the past, the movie is an exploration about how he can connect himself to humans again.

With losing Bouc, one of his closest friends in the film, he faces the biggest loss of his life in a while. Clearly this job has taken a toll on him by the end and has affected him in a really bad way.

So of course in a way to find himself connected to someone again, he clearly is disappointed in turning down Salome. If the ending is anything to go by, then it looks like he goes to Salome’s bar to make up with her and potentially start a romance. Death On The Nile Movie Review: Gal Gadot, Ali Fazal’s Film Receives Mixed Reactions.

If there are new films down the line, then it’s possible we might get to see an even more empathetic Hercule Poirot.

Death on the Nile is playing in cinemas right now.

(The above story first appeared on LatestLY on Feb 11, 2022 02:00 PM IST. For more news and updates on politics, world, sports, entertainment and lifestyle, log on to our website latestly.com).