Everything Everywhere All At Once: Michelle Yeoh’s Sci-Fi Film to Stream on Apple TV and Amazon Prime Video From June 7

The genre-bending dark comedy Everything Everywhere All At Once is heading to OTT and will be available to stream from June 7. 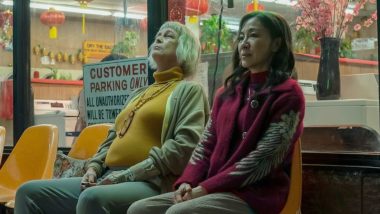 Still From Everything Everywhere All At Once (Photo Credits: Twitter)

The genre-bending dark comedy Everything Everywhere All At Once is heading to OTT and will be available to stream from June 7. The film is an A24 production, the production company which has earlier delivered some of the finest films in the past like 'Hereditary' and 'Midsommar', reports Variety. Red, White & Royal Blue: Uma Thurman to Play US President Ellen Claremont in Amazon’s Rom-Com.

The film, directed by Daniel Kwan and Daniel Scheinert, opened to stellar reviews when it came out in April, pulling in an impressive $35 million at the box office after six weeks in theatres. According to Variety, the film will be available to purchase for $19.99 on platforms such as Apple TV and Amazon Prime on June 7, before being released in 4k UHD and Blu-ray next month. The Boys Season 3 Review: Karl Urban and Antony Starr’s Superhero Series on Amazon Prime Video Is a Crazy Ride That Will Leave You Satisfied! (LatestLY Exclusive).

The film stars Michelle Yeoh as Evelyn Wang, a wife and mother living in a multiverse who begins the film being audited by the IRS. Things take a dramatic and absurdist turn when she realises she has to connect with parallel universe versions of herself in order to prevent worldly destruction.

(The above story first appeared on LatestLY on Jun 03, 2022 12:40 PM IST. For more news and updates on politics, world, sports, entertainment and lifestyle, log on to our website latestly.com).