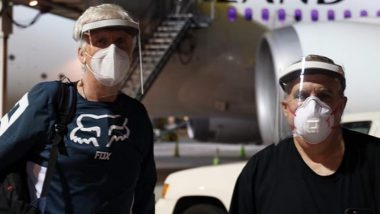 New Zealand has shown a way to the world combat COVID-19 pandemic in record time. The country only had 22 deaths if reports are to be believed. Thanks to that they have been able to restart the economy soon enough. Recently, Titanic director James Cameron landed in NZ to start filming Avatar sequels. But the director and the producer have been put in 14 days quarantine as instructed by the government. Producer Jon Landau shared images from the airport informing about the same. Entertainment News | James Cameron, Jon Landau Return to New Zealand for ‘Avatar’ Restart

The New Zealand Film Commission had informed that television and film productions are safely underway in the country. Apparently, Avatar sequels' principal photography was going on when the lockdown was imposed in NZ due to Coronavirus.

Avatar's next two sequels will be out in December 2021 and 2023. There are two more sequels which will be filmed and have been confirmed. But release dates have not been announced. Avatar which released in 2009, was the highest-grossing movie in the world till Avengers Endgame replaced it last year. During the lockdown, team was working on special effects which Jon and Cameron were supervising.

(The above story first appeared on LatestLY on Jun 03, 2020 04:31 PM IST. For more news and updates on politics, world, sports, entertainment and lifestyle, log on to our website latestly.com).