Johnny Depp's Lawyers Tell Court of Appeal He 'Did Not Receive A Fair Trial' In 'Wife-Beater' Case, Actor To File For Re-Trail (Deets Inside)

As per reports, Johnny Depp's legal team has conveyed to the Court of Appeal that the High Court ruling accusing The Pirates of the Caribbean actor of assaulting his ex-wife Amber Heard and putting her in fear for her life was "plainly wrong". 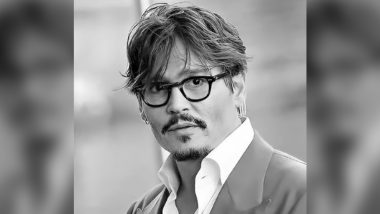 Hollywood legend Johnny Depp lost his libel case against The Sun back in November 2020. The actor had sued the publication for calling him a 'wife-beater' in one of their 2018 columns over allegations that he would assault his then wife Amber Herd. Soon after, he was asked y Warner Bros to step down from the next Fantastic Beasts franchise movie. Confirming the same in a statement, Johnny had revealed that he would not let his career be defined by this moment in time and confirmed that he planned to appeal against the ruling. Johnny Depp Loses Libel Case Against a Tabloid That Tagged Him a ‘Wife Beater’, Court Says Accusations Were ‘Substantially True’.

And now, his council has taken the first step towards filing for a re-trial. As per reports in Mirror.co.uk, Johnny Depp's legal team has conveyed to the Court of Appeal the High Court ruling accusing The Pirates of the Caribbean actor of assaulting his ex-wife Amber Heard and putting her in fear for her life was "plainly wrong". Johnny Depp Asked By Warner Bros To Resign From Fantastic Beasts 3 After He Loses Libel Case In London, Actor Releases Statement (View Post).

As per the report, Johnny's team, in their letter to the Court of Appeal, penned, "His (Mr Justice Nicol) uncritical acceptance of her account of events is manifestly unsafe." They also stated that they will ask to "set aside the judgment and order a new trial". The report also mentions how the team has called out Justice Nicol who "failed to undertake any, or an adequate analysis, of Ms Heard's shifting account, despite the importance of consistency as a consideration of a witness's testimony".

The written letter to the Court of Appeal, also stated how Mr Justice Nicol "concluded that the appellant was guilty of serious physical assaults without taking account of or even acknowledging that Ms Heard had been untruthful in her evidence, without testing her account against the documentary evidence and the evidence of other witnesses, and without making any findings that he disbelieved those witnesses".

"Also he excluded relevant evidence from his consideration, ignored or dismissed as irrelevant matters that substantially undermined Ms Heard, made findings unsupported by the evidence, and failed to assess whether her allegations could withstand proper scrutiny. The judge failed to properly assess her credibility by reference to documentary evidence, photographs, recordings or otherwise," the letter read.

Mr Sherborne, who is representing Depp also concluded the ;etter by adding, "This was a very public judgment, reached by a single judge, making devastating findings of extremely serious criminal offences having been committed, and where this has had wider ranging implications for the public at large, particularly victims, or those wrongly accused, of alleged domestic abuse. "It is important that in such circumstances, and especially where the flaws in this judgment are so many and so fundamental as to warrant a proper review, that there is an effective appeal process."

(The above story first appeared on LatestLY on Dec 26, 2020 09:12 AM IST. For more news and updates on politics, world, sports, entertainment and lifestyle, log on to our website latestly.com).