Kanye West Birthday: 5 Interesting Fact About the Rapper That You Probably Did Not Know

Apart from this, the musician is also obsessed with accessories. In his association with Adidas, he even managed to come up with his own line, Yeezy which is a limited edition and includes athleisure wear and shoes. 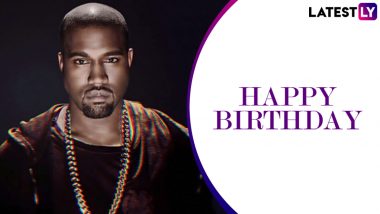 Kanye West is one of the most popular and followed rappers in the world, He is a globally recognised face in the world of music and people are a huge fan of his work. West first got notice when he co-produced shows, most notably for Jay-Z and Talib Kweli. His debut album was The College Dropout which was released in the year 2004, and it made him a star in no time. Currently, he is one of the highest-selling artists of all time. Rapper Kanye West Honours Kobe Bryant at Sunday Service.

While he has more than 100 million digital downloads and millions of music albums sold worldwide, he has had his fair share of critics. This, however, doesn't stop the star from being what he is and making sure that he continues to express himself through his music like he can or perhaps like only he can. Apart from this, the musician is also obsessed with accessories. In his association with Adidas, he even managed to come up with his own line, Yeezy which is a limited edition and includes athleisure wear and shoes.

But while Kanye West's life is quite public, there are some aspects of his life that his fans don't know. Today, as Kanye gets ready to celebrate his 43rd birthday and cut the cake, here's looking at some interesting trivia about the rapper.

Kanye used to live in China with his mom for a short time. He was 10 years old when his mother accepted a teaching job there. Kanye was able to pick up the language quickly while he was staying in the country.

Kanye got an early start in the world of music. He began his career by writing poetry. He was five when he wrote his first poem and started rapping by the time he was in third grade. At the young age of 13, he recorded his first rap song, which was a fresh take on the famous Dr Suess poem, “Green Eggs and Ham.”

Kanye West is a college dropout. He had gotten a scholarship to study at Chicago’s American Academy of Art for one year, but he then transferred to Chicago State to earn a degree in English. He eventually dropped out to pursue his music career. While struggling to make a name for himself, Kanye was forced to take on odd jobs to manage his finances. He used to work as a telemarketer for the retailer Montgomery Ward, selling insurance to their credit cardholders.

Following the success of The College Dropout album, Kanye received his first paycheck. He celebrated the feat by rewarding himself by purchasing a large 18-century aquarium. The aquarium had 30 koi fishes and a gold fountain sitting on a marble base. Fact Check: Kanye West Fell off a Horse While Arriving at His Sunday Service? Kim Kardashian Furious Over the Fake Video Circulating on Twitter.

Kanye Has Been Arrested Thrice

Kanye has been jailed three times. The arrest was a result of altercations with the paparazzi every time. He received probation, mandatory anger management counselling, and community service requirements for the felony. He, however, did not have to serve jail time even once.

Kanye West has always been entertaining. Be it with his music or his personal life, West has always managed to stay relevant. Join us in wishing the singer a very happy birthday.

(The above story first appeared on LatestLY on Jun 08, 2021 09:10 AM IST. For more news and updates on politics, world, sports, entertainment and lifestyle, log on to our website latestly.com).