Miley Cyrus and Boyfriend Cody Simpson Call It Quits After Dating for 10 Months? (Deets Inside) 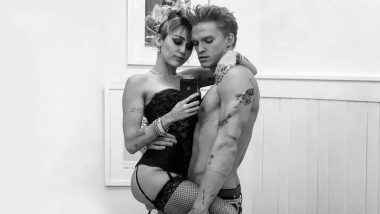 Relationships are uncertain in the entertainment business. As we sometimes see a celebrity couple happy in each other arms and the next moment we hear that they are no more together. Talking on the same lines, the latest news doing rounds in the tinsel town is that Miley Cyrus and boyfriend Cody Simpson have called it quits. Yep, as per a report in E! News a source has confirmed the breakup development to the portal. However, there has been no official confirmation from the stars yet. This sad news comes just before the launch of Miley's upcoming single from her forthcoming album, 'Midnight Sky'. Is Miley Cyrus Upset With Cody Simpson after His 'Not Ready for Marriage' Statement?

The report elaborates that it was Cody who initiated the split a few weeks ago and that's how their romance has come to an end. However, the reason behind the couple saying goodbye to each after 10 months of dating is still unclear. It was in October 2019, when Cyrus and Simpson started dating after the former had ended her love story with reality TV star Kaitlynn Carter. This update about Miley and Cody is shocking as it was sometime back when the man had shared a mirror selfie with Cyrus. Is Miley Cyrus Pregnant? Here's What Boyfriend Cody Simpson Has to Say!

captain’s dance with the devil

"We keep each other in a good place. That's what's really healthy about it and I think that's the first time I've had that in a relationship. We're very, very much on the same page," Cody had said about his and Miley's relationship when he appeared on The Kyle and Jackie O Show. Lastly, looks like finally, the PDA saga of the two has come to an end. Stay tuned!

(The above story first appeared on LatestLY on Aug 14, 2020 09:33 AM IST. For more news and updates on politics, world, sports, entertainment and lifestyle, log on to our website latestly.com).