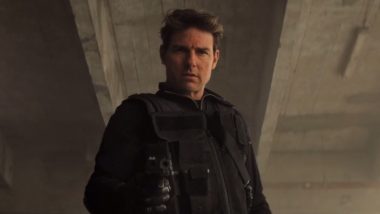 Mission: Impossible 7 has been one of the most anticipated projects and fans can't wait to see Tom Cruise bring yet another action entertainer from the popular franchise. Although with the COVID-19 situation, the film has already faced delays and now yet another incident came as a massive setback for the film. During its filming in England recently, an explosive stunt on the film's set went terribly wrong. As per reports, the stunt designing had taken over six weeks of planning and was mounted on a high budget. While everyone on set escaped unhurt including the stuntman, it has certainly put the production schedule on a halt. Mission Impossible 7: Tom Cruise Is Eager to Shoot in Italy Once COVID-19 Restriction Ends.

As reported by The Sun, the stunt involved a stuntman on a motorcycle jumping off of a high ramp, which quickly went awry after the motorbike burst into flames upon landing. The accident resulted in Oxfordshire Fire Services dispatching five fire engines and crews to the set. The film set has temporarily been shut down. Reports have also stated that actor Tom Cruise wasn't on set when the accident happened. In fact, the actor was filming with a parachute nearby when the motorbike exploded. NASA Confirms Tom Cruise's Next Film Will Be Shot On International Space Station.

The Daily Mail in its report stated that a source from the set informed them about Tom's reaction to the latest setback and revealed that the actor was 'frustrated' over the miscalculation that resulted in the stunt going wrong. The film was initially set to hit the theatres on July 23, 2021, but will now release on November 19, 2021. With first the pandemic and now this set accident causing delays for the project, the 8th instalment of the film which was announced along with MI:7 will be pushed further 2022.

(The above story first appeared on LatestLY on Aug 14, 2020 01:39 PM IST. For more news and updates on politics, world, sports, entertainment and lifestyle, log on to our website latestly.com).