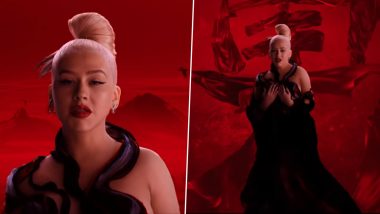 Disney's high-budget adventure Mulan is now dropping on Disney Plus, skipping a theatrical release in the wake of the pandemic. The promos of the film look awesome and this might be the best Dinsey film. Christina Aguilera has performed a song titled, "Loyal Brave True", dropped a couple of months ago. Today, the singer released the music video for the same with Disney. It is a trippy number that deserves your attention. The number is written by Jamie Hartman, Harry Gregson-Williams, Rosi Golan and Billy Crabtree, and produced by Jamie Hartman. Mulan Promo: Disney's Spirited Warrior Tale To Release On Disney+ on September 4! (Watch Video).

"Should I ask myself in the water / What a warrior would do? / Tell me, underneath my armor / Am I loyal, brave and true?" Aguilera sings in "Loyal Brave True".

Christina has a long association with Mulan. She was roped in to cover "Reflection" when the original animated movie came out in 1998. She has covered "Reflection" once again for the live-action remake that will release on September 4. "Reflection" earned Christina her second record deal and the rest of her career.

In the music video, Christina dances against a red backdrop. Gorgeous. Scenes from the movie play out as a silhouette. She is wearing a maroon black dress, her hair tied into a bun. She has also recorded the song in Spanish. Now, that will also be interesting.

(The above story first appeared on LatestLY on Aug 14, 2020 08:56 PM IST. For more news and updates on politics, world, sports, entertainment and lifestyle, log on to our website latestly.com).