Omicron: Know All About the Italian Sci-Fi Film That is Trending Thanks to Its Namesake COVID-19 Variant, Here’s Where You Can Watch Movie Online

There are three movies that share the name Omicron, though we won't blame you if you haven't heard any of them. The 1963 Italian film is the more popular one, having also screened at the 24th Venice International Film Festival. 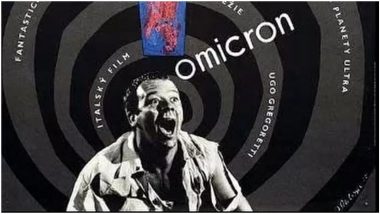 Now if you are reading the major headlines, you would find the name 'Omicron' popping up everywhere. Omicron is the new COVID-19 variant identified by the scientists in South Africa, that is once again threatening to put humankind under wariness and fear. And also make yesteryear movies trend! Remember when the first wave of COVID-19 hit the world and made movie buffs check out films made on similar pandemics? At that time, Steven Soderbergh's Contagion was on top of nearly every trending list, as the viral pandemic it explores in its fictional narrative had nearly the same severe symptoms as Coronavirus. Now with Omicron threatening to close borders again by ushering in another wave, another film is becoming a trending topic these days. Omicron Symptoms: Patients Show Extreme Tiredness, No Major Oxygen Drop.

Unlike Contagion, though, the movie in question has nothing to do with a pandemic. The only reason it is probably trending because it shares the same name as the variant - Omicron. We are talking about the 1963 Italian movie that was written and directed by Ugo Gregoretti, and had starred Renato Salvatori and Rosemary Dexter (in her movie debut) in the lead.

Omicron belongs to the same genre as Contagion - science fiction - but it had a light-hearted treatment and was more political in nature (latter which, though, you can also say about Contagion). The premise of the film is about an alien who takes over the body of a factory worker, so that he can understand how our race works, and thus pass his findings to its people in taking over our planet. Kind of like PK, if Aamir Khan's alien didn't get befuddled by our religious dogma!

The whole movie had been posted on Youtube which you can view below:

The movie is also available on MUBI.

'Omicron' derives its name from the fifteenth letter of the Greek alphabet, and is also the name of fifteenth star in a constellation, if you are curious about this name. Amid COVID-19 Outbreak, Matt Damon’s Contagion Gains Popularity; Here’s Where You Can Binge Watch the Movie Online.

Interestingly, there is another movie called The Visitor from Planet Omicron with similar themes as the 1963 movie, but even more comedic. This film came out in 2013 and was directed by Mike Donahue.

As per IMDb, there is also a movie called Project Omicron that was also a science-fiction film and was directed by Jared Whitham. Now with the variant making 'Omicron' a household name, wondering how many filmmakers have gone on to register that name for their upcoming movies?

(The above story first appeared on LatestLY on Nov 30, 2021 03:19 PM IST. For more news and updates on politics, world, sports, entertainment and lifestyle, log on to our website latestly.com).