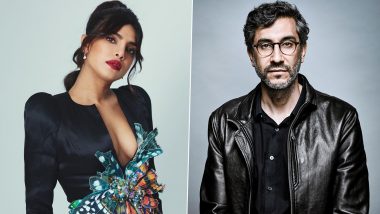 Priyanka Chopra and Iranian-American director-writer Ramin Bahrani collaborated for The White Tiger and created a film that is receiving a lot of love from people across the globe. The director is also is nominated for a BAFTA for the Best Adapted Screenplay for Netflix film. He was speaking to a group of Academy and BAFTA members when he was subjected to racist insults from a bystander. Bahrani was on a Zoom Q&A with The White Tiger executive producer Ava DuVernay when the incident took place. The White Tiger Full Movie in HD Leaked on TamilRockers & Telegram Channels for Free Download and Watch Online; Priyanka Chopra, Rajkummar Rao and Adarsh Gourav’s Film Is the Latest Victim of Piracy?

Bahrani, who was born and raised in North Carolina, told PEOPLE, “I was in Atlanta on location in a residential neighbourhood directing a TV pilot. We had worked late that day, so I had to do my Zoom interview with Ava on my phone while we were still in the street. During the interview, I noticed a car parked behind me. When the driver saw me and my colleague (who is South Asian) he said, ‘You all think you run the world. You all don’t run s***.’ His friend told him to calm down and leave it alone. As the driver pulled away, he shouted, ‘Go back to your own country!'”

Priyanka Chopra came to know about the incident and went on to extend her support to Bahrani after the incident. “Asking me about my thoughts on what happened to Ramin is a sign of where we stand today, and the work we have to continue to do. So my question in response is – who belongs here, and who doesn’t? Isn’t America a melting pot of all people from all backgrounds? This country was built on the back of immigrants in search of the American dream, a life of freedom, opportunity, and a safe place not only for themselves but for their families," said Chopra.

She further added, “This is about how common it is for many communities to live with incidents like this happening all the time. Content by Hollywood is embraced by the world, but the world is not always embraced by Hollywood. Hollywood and pop culture, in general, have a massive responsibility in this fight for racial equality and representation in global entertainment.” BAFTA 2021: Adarsh Gourav Gets Nominated for The White Tiger.

(The above story first appeared on LatestLY on Apr 19, 2021 12:12 PM IST. For more news and updates on politics, world, sports, entertainment and lifestyle, log on to our website latestly.com).