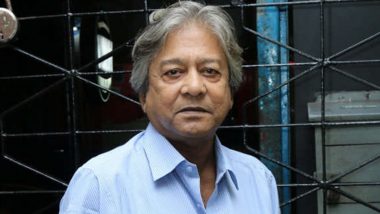 Kolkata, Jan 31: Veteran Bengali actor Indrajit Deb died here on Saturday following a cardiac arrest, family members said. He was 73. He had lost his wife a year back and the couple did not have children. RIP Soumitra Chatterjee: Mamata Banerjee Pens Emotional Note to Mourn the Loss of Legendary Bengali Actor.

Deb was also suffering from chronic obstructive pulmonary disease (COPD) and kidney ailment for a long time and died at his Gol Park residence in the southern part of the city, the family members said.

Deb had started his career in a popular TV serial- 'Tero Parbon', and played an important role in 'Karuanamoyee Rani Rasmoni' and web series- The Adventures of Gogol. Actress Sudipta Chakraborty expressed grief over the demise of Deb, describing him as a childhood mentor.