On June 30, 2021, India's first-ever Marathi OTT platform came alive with their first-ever TVOD feature presentation, June. A path-breaking entertainment platform marked its beginning with a film that had amassed global recognition already. With the lineup of amazing artistes and the creative team that birthed June, it was essentially a sensation even before its release. 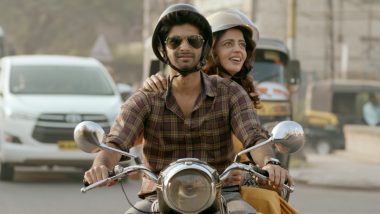 On June 30, 2021, India's first-ever Marathi OTT platform came alive with their first-ever TVOD feature presentation, June. A path-breaking entertainment platform marked its beginning with a film that had amassed global recognition already. With the lineup of amazing artistes and the creative team that birthed June, it was essentially a sensation even before its release. Nevertheless, the film has surpassed expectations with affluent filmmaking, passionate performances, and sensible writing. Mayuresh Kotkar, Marathi Actor, Arrested for ‘Objectionable’ Social Media Post Against Maharashtra Minister Eknath Shinde.

The film June is an emotionally transforming journey of two souls who seek solace in each other. The film was successful in touching the audience with the display of raw emotions. Gently opening layer after layer inside the complex psyche of someone who has experienced loss, trauma, or pain, Nehha Pendse-Bayas, and Siddharth Menon have given exemplary performances. Mayuresh Kotkar, Marathi Artist, Arrested in Thane For Allegedly Posting Objectionable Statement Against State Minister Eknath Shinde.

The film narrates a deep yet beautiful message about healing. Kiran Karmarkar, Resham Shrivardhan, Jitendra Joshi, and Nilesh Diwekar have significant roles in shaping the film's story. Suhrud Godbole's debut direction has certainly raised the bar for Marathi filmmakers with Vaibhav Khisti adding his spark in the genre. The story penned by Nikhil Mahajan has a steady build-up that eventually unravels into a meaningful takeaway.

Writer Nikhil Mahajan reveals his take on June's success saying: "It is a moment of great pride for me and our entire team of June. We are the first Marathi film to release on Planet Marathi OTT. This platform is creating history by truly re-inventing the way Marathi content is viewed. I am truly touched to have an extra special fringe to my production and screenplay with Planet Marathi OTT. For me, June has been a project birthed from passion. In today's highly connected times when people are emotionally disconnected, this tale of complex emotions, loss, grief, hope, and eventually of healing, had to be told. I am glad this story found an amazing team of artistes, creators, and distributors."

With critical acclaim from legendary film critics like Komal Nahta, Joginder Tuteja, Anupama Chopra's Film Companion and Vinayak Chakravorty of IANS, June is making more heads turn each day. June has been selected under the category of Indian Panorama for the 51st International Film Festival Of India. The film has already shined in the Pune Film Festival, Kerala Film Festival, and New York Film Festival as well. Nehha Pendse Bayas and Siddharth Menon were nominated in the Best Performance category, where Siddharth Menon has won the award.

Nehha, who is also the co-producer in the film, expresses her excitement about June's success. She commented: "June was an experience of self-discovery for me. I could unravel these complex emotions on-screen with the help of Nikhil, Suhrud, and Vaibhav. Siddharth greatly complimented me on this journey. This authenticity and passion really connected with the audience. I am really happy that viewers have accepted our performances with open arms. Planet Marathi OTT has truly given justice to the film by giving it a global theatrical release but even better digitally. We couldn't have had a better platform!"

Enthralled with the reviews and amazing response of viewers, actor Siddharth Menon says: "There are some stories that purely transcend and June was one of them. The story of June is the hero here, we are merely tools of communicating this message to the audience. We are glad that creative efforts by team June and Planet Marathi OTT's platform could narrate this important story to a global audience. The responses are overwhelming and it is surely a pat on the back when the audience (the biggest critic) responds to the film with so much love!"

Planet Marathi OTT has launched with June as its first feature film. It enabled the 'ticket window' on Marathi OTT film release where viewers could buy a ticket for the film even if they are not subscribed. Singapore-based media capital company, Vistas Media Capital, has invested in Planet Marathi for Planet Marathi OTT to enable this and many more such innovations on the platform.

Akshay Bardapurkar, CMD Planet Marathi, says: "June is a film close to my heart since it is set against the backdrop of Aurangabad, a picturesque town with many stories bustling in its heart. My close friend Nikhil Mahajan has written this exemplary tale. I was sure that I wanted to be a part of June's success the moment I heard about it. Vaibhav, Suhrud, Nehha, Siddharth, and the team have made the movie an experience for a lifetime! We are glad to be a part of June's success and it is gratifying to see that the world can now experience the first-day-first-show premiere of a Marathi movie on Planet Marathi OTT!"

(The above story first appeared on LatestLY on Jul 03, 2021 02:05 PM IST. For more news and updates on politics, world, sports, entertainment and lifestyle, log on to our website latestly.com).