Netflix's YOU Season 2 Review: Penn Badgley Once Again Leaves a Lasting Impression in This Crisp, Gripping and Twisty Thriller

We are no alien to Joe Goldberg's stalking, kidnapping and killing shenanigans and his brief ‘love’ story with Guinevere Beck. Now, season 2 is all about his love story with ‘Love.’ 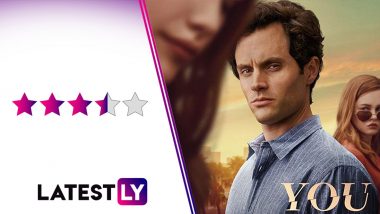 Netflix finally dropped the second season of Greg Berlanti and Sera Gamble’s YOU, a psychological thriller that almost wants you to hate and like the protagonist at the same time. No doubt that the first season was a smooth run that did not allow you to skip a single episode. It took us through the life of Penn Badgley’s serial killer with name Joe Goldberg who has his own way of thinking why he is doing what he is doing! We are no alien to his stalking, kidnapping and killing shenanigans and his brief ‘love’ story with Guinevere Beck (Elizabeth Lail). Now, season 2 is all about his love story with ‘Love.’ Netflix Series The Witcher Review: Henry Cavill is Hot But Anya Chalotra and Freya Allan Are the Pillars Of This Visual Spectacle.

The first season ended with him killing his obsession, Beck and the return of his ex-girlfriend Candance (Ambyr Childers). Season 2 picks up exactly from this point. Joe returns as that charming looking person who is equally dangerous and injurious to any human being’s health! The episode starts with his thoughts. And by the time you realize that all these were his thoughts, leading you to the story, you are too far immersed in his story from where there is no going back.

Joe’s world starts afresh under the pseudo name of Will Bettleheim in the city that he hates the most- Los Angeles. In a quest to hide from Candace and starting a new life without the trace of any complicated lovestory, he meets Love Quinn (Victoria Pedretti). They share a workspace at a bookstore café where he impresses everyone with his knowledge with books that he has with the experience, we know from where.

The makers have retained almost all the elements of the first season when it comes to writing of the season except, this one has little twists and turns from the initial episode itself. It takes you on a roller coaster ride of Joe’s emotions and does not give you time to vouch or bash him through the entire story. While one might just want to fathom over what just happened, the story has another set of twist ready for you.

Victoria aka Love is a delight to watch on the screen. She brings along with her a spunk and an eerie feeling. The makers have made sure that you get a different gut feeling about her intentions since the point when she bumps into Joe in a market. Her chemistry with Joe is as sparkly as Beck’s. What should one say about Penn’s performance? Looks like he has studied his character hard just as Joe studies his victims! We do get occasional Dan Humphrey glimpses (his character in Gossip Girl), but he soon manages to bring back the Joe in him with utter perfection. At times, one might just marvel at the way his thoughts are penned down by the makers: raw, funny at times, evil and quick than your own thoughts! His constant commentary throughout the season gives this dark series a light touch.

A few key characters in the season are however, given a more of the caricaturish treatment at times. With Joe being so smooth with his motives and actions, we feel like wanting an equally smooth character to keep him engaged. The season also has more of bloodshed than the previous ones. The shots taken in LA captures the vibe and tells us why this was an apt backdrop for this season. The season also has a bunch of subtle flashbacks, childhood memories and references from the first season which makes it a bit important for the fans to be updated with the previous season.

Netflix’s YOU season 2 is just a fine example of how a ‘part two’ should be like. After all, continuity and inevitable comparisons are the major parts of such projects. The second season has taken away nothing from the first one but has definitely added more layers to the lead character.

If we sum it up in a sentence, Penn and his thoughts take away the cake in the fascinating season. Just like YOU, you won’t be able to quit watching YOU 2 without getting to the roots of it.

(The above story first appeared on LatestLY on Dec 29, 2019 03:36 PM IST. For more news and updates on politics, world, sports, entertainment and lifestyle, log on to our website latestly.com).