Aditi Rao Hydari on Sufiyum Sujatayum: I Felt a Very Fairytale-Like Quality in the Narrative 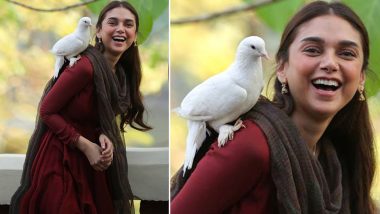 Actress Aditi Rao Hydari found "true love" on the set of her debut Malayalam film, "Sufiyum Sujatayum". Happily posing with a pigeon on her shoulder in a photo, Aditi wrote: "Everytime I set it free, it came right back...#TrueLove #SufiyumSujatayum." The Malayalam film recently released on an OTT platform. Sufiyum Sujatayum Producer Vijay Babu Says Regional Cinema Is Getting Its Due Through OTT

"When I heard the story, I felt a very fairytale-like quality in the narrative. It is almost like a fable that we hear in childhood, where the world and incidents happening around are surreal but all the characters and their emotions are real. I found it fascinating. Also, in the film I am playing the character of a girl who is speech-impaired, which means I have no dialogue. So I didn't think twice before saying yes to the film," she had told IANS. Sufiyum Sujatayum Movie Review: Aditi Rao Hydari Steals The Show In Naranipuzha Shanavas’ Musical Love Tale (Read Tweets)

Everytime I set it free, it came right back... 🤍 #TrueLove #SufiyumSujatayum

"The stories of Malayalam films are good. I watch them and I am a fan of Malayalam cinema. But learning Malayalam is tough. I managed Telugu and Tamil. I am half south-Indian -- I am Hyderabadi. Earlier I didn't do Malayalam films because that is a very difficult language for me to learn," she had said.

(The above story first appeared on LatestLY on Jul 08, 2020 07:56 PM IST. For more news and updates on politics, world, sports, entertainment and lifestyle, log on to our website latestly.com).