After Master’s Success, Vijay Sethupathi To Once Again Turn Baddie for Prabhas’ Salaar?

Master starring Thalapathy Vijay as a protagonist and Vijay Sethupathi as antagonist led to a positive storm at the ticket window. Owing to the same, the latest reports suggest that the makers of Prabhas' Salaar have approached the Sethupathi to once again play a negative role in their film. Check it out. 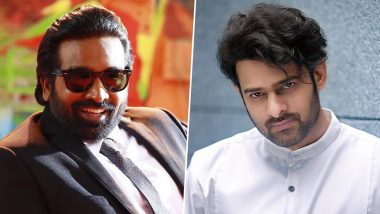 Master starring Thalapathy Vijay as a  protagonist and Vijay Sethupathi as antagonist led to a positive storm at the ticket window. The South film not only was loved by critics and viewers, but it also crossed the 200 crore club at the box office. Not only this but it also revived the theatre business in India which was all dull due to COVID-19 scare last year. Now, after the success of this film, the latest we hear is that Vijay Sethupathi has been approached to once again play a negative role in Prabhas starrer Salaar. Reports hint that it’s due his stellar act in Master, the makers of Salaar decided to approach Sethupathi for the role of a baddie. Master Box Office Collection: After Mersal, Sarkar and Bigil, Thalapathy Vijay’s Latest Film Joins 200 Crore Club, Fans Trend #MasterEnters200CrClub On Twitter.

Even after this rumour, until yet, nothing is confirmed nor has been official regarding the same by the actor or the makers. Seems like Sethupathi’s massy stint in Master is churning him new offers and how. Having said that, if true, it’ll be interesting to see Prabhas vs VJS on the big screen locking horns for the first very time. FYI, Salaar is helmed by KGF fame Prashanth Neel. Master Box Office Collection Day 5: Vijay and Vijay Sethupathi Starrer Film Enters the 100 Cr Club Within a Week of Its Release.

Team #Salaar has approached @VijaySethuOffl to play the baddie in the #Prabhas starrer. But things are yet to be officially confirmed. #VJS is getting a lot of offers now to play the antagonist after the massive success of #Master! pic.twitter.com/ZwCWbtwOo3

Reportedly, Salaar will most probably go on floors by the last week of January 2021. It was recently on Jan 15, when the makers had organised a puja in Hyderabad to kickstart the work. This flick will see Prabhas in a beefed-up and violent role. “I’m really excited to start the shoot of the film post the Muhurat Puja in Hyderabad and reveal my look to the fans,” Prabhas had said while talking about his character in the movie. Stay tuned!

(The above story first appeared on LatestLY on Jan 23, 2021 09:23 AM IST. For more news and updates on politics, world, sports, entertainment and lifestyle, log on to our website latestly.com).