Beast: Thalapathy Vijay Is A Big Shah Rukh Khan Fan And This Throwback Video Says It All

This video is one from of the interviews given by Vijay after the success of his film Pokkiri. During the interview the actor was asked if he would ever play a negative role and here's what the actor had to say. 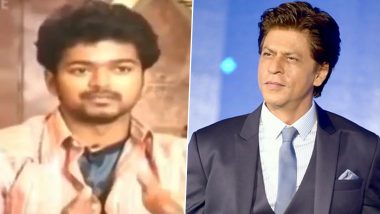 Beast, which has been titled Raw in Hindi, is all set to be released in theatres on April 13. Fans are thrilled to watch Thalapathy Vijay playing the role of a spy in the upcoming hostage drama that has been helmed by Nelson Dilipkumar. Last evening, Shah Rukh Khan shared the Hindi trailer of Beast and mentioned in his post that he’s a big fan of Vijay. Fans loved when SRK said that about Vijay and an old video of the latter started doing rounds in which he says that shows he’s a big fan of King Khan too. Beast: Shah Rukh Khan Calls Himself a Thalapathy Vijay Fan as Superstar Enjoys the Trailer With Director Atlee.

This video is one from of the interviews given by Vijay after the success of his film Pokkiri. During the interview the actor was asked if he would ever play a negative role or would always beat up the bad boys and be hero. To this Vijay responded saying, “I’m not against negative roles.” He also said, “I’m not 100% comfortable in an anti-character. But maybe if I’m offered roles such as Shah Rukh’s Baazigar or Darr, then I can consider”

Both are Mutual Fans of Eachother ❤️ Hope to see them together on Screen#Beast #Raw https://t.co/AcAvlZksim pic.twitter.com/nFDcQQ8Qxd

Talking about Beast, the film stars Pooja Hegde opposite Thalapathy Vijay. The film produced under the banner of Sun Pictures also features Selvaraghavan and Yogi Babu in key roles.

(The above story first appeared on LatestLY on Apr 06, 2022 02:46 PM IST. For more news and updates on politics, world, sports, entertainment and lifestyle, log on to our website latestly.com).